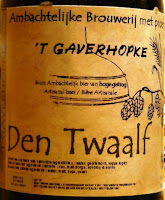 This one comes from t´Gaverhopke brewery out by Kortrijk, another one of those small producers this country can boast of that makes me realise that, even after trying nearly 350 Belgian beers, I’ll never know about them all, let alone taste them. Still, it’s worth a try...

Den Twaalf pours a burnt-butter brown and is intensely fizzy at first. The taste initially comes at you like a Belgian red beer -- vinegary and aggressive -- though since I was introduced to Rodenbach Vintage 2008, the style has been growing on me.

Still, that’s a bit simplistic a description of Den Twaalf, because this one evolves quite a bit in the glass. You soon pick up its sweet malt underbelly and blackberry notes. Strangely, if it weren’t for the name and the label, I’d never have guessed this beer had 12% alcohol. It doesn’t overpower the other tastes.