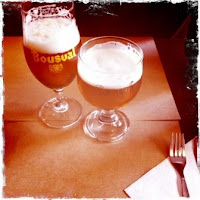 I thought that I’d cleared out most of my old tasting notes and finally got them posted on this blog in my big spring cleaning a couple weeks ago. Wrong: I keep finding bits and pieces in various places.

Months back, we tried two new beers with Bob at L’Ultime Atome, one of my favourite places to have a beer in Brussels: Bousval and Bersalis Triple. According to my old notes, they were quite good, too.

Bousval poured the colour of a copper brewing tun, with fine carbonation and a thick, puffy head. The aroma was fruity, and that developed in the mouth as a raspberry note. It wasn’t sweet. I’d say, and certainly not syrupy, but it seemed to leave a strange hint of honey on the roof of the mouth. Not bad at all.

The second beer that day was Bersalis Triple. This one had light carbonation and a pleasantly thick mouthfeel. There were hints of coriander, and Bob even thought it was bordering on white beer.

It is somewhat spooky that I rediscovered my notes on Bersalis on the same day I tried Oud Beersel Gueuze and Kriek, which hail from the same brewery.