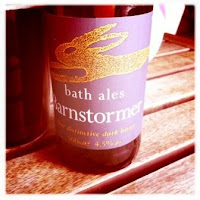 We went to a wedding in England recently.

No, not that one. A much nicer one in the West Country. And -- surprise, surprise -- we tried a couple beers while we were in the region over the long weekend.

I’d never been to a Formula-One-themed wedding at a stately home in the Somerset countryside before, and I doubt I’ll ever have the opportunity again. But before you start thinking it all sounds a bit odd, let me say that it worked perfectly.

He’s a serious F1 fan, and his passion for motorsports has clearly been contagious. They got engaged in Monaco during the grand prix, for example, and they both have a soft spot for his Ferrari. Not a bad way for the groom to arrive...

At the beautiful Coombe Lodge, near Bristol, the couple arranged it so that each wedding table was paired with a different F1 track. Being from Belgium, we were naturally seated at the Spa table. A place card revealed incredulously that despite years of living in the country, we had actually never been to see the race there.... 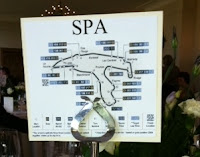 With such details at the reception, not to mention the wonderful heartfelt ceremony and the unseasonably warm weather, we had an amazing time.

Bath Ales Barnstormer is a dark bitter that pours red-brown -- though, oddly, Fiona and I both saw a very faint purple hue to it in the light of the setting sun. It has a thin mouthfeel, and burnt malt is the first and foremost taste, a mix of toast and sweetness. Fiona said it has a liquorice note, but I didn’t quite get that. 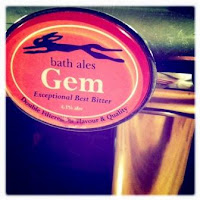 Bath Ales Gem is not as dark, but it is deeply amber on the pour. Compared to the Barnstormer, Gem throttles back the maltiness -- get the motorsport reference? -- so the bitterness seems much more purely hop. Also a winner.

Cheers, and all the best, Alison and Gareth!! 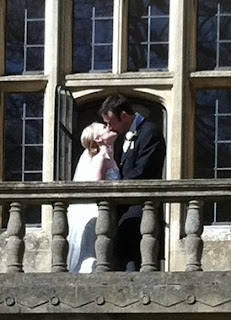