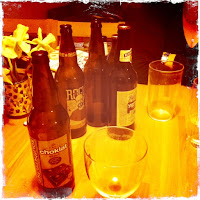 With the weather in Brussels absolutely amazing in recent weeks, we’ve been out on the terrace sun-trap nearly every evening. But while it feels like summer has arrived early, I still have a stack of tasting notes from the winter months I need to get through. So, as I sit outside on yet another incredible afternoon, I’d better get down to it.

Somewhere in the depths of the snowy season, Bob dropped by for a weekend with an armful of new beers to try: some Dutch, some American and some Belgian. The first -- or, at least, the top of my notes pile -- was Gulpener Winter Vrund, another fine beer from the Dutch town of Gulpen, tucked in the southernmost corner of the Netherlands. I actually managed to get out there to the brewery last autumn, and I got some Gulpener Korenwolf for a big low-countries beer tasting event.

Now I notice I never ever wrote up Gulpener Korenwolf... Just too many notes lying around... Anyway, to catch up a bit, let me say that Gulpener Korenwolf is a fantastic white beer, strongly aromatic from the elderflowers added, and it is perhaps my favourite white. You have to love the name as well: “korenwolf”, corn wolf, means hamster. I’ve added this beer to a tasting evening I’ve got coming up here in a few weeks.

But getting back to the point, if a bit slowly, we were looking at Gulpener Winter Vrund, a dark winter beer with a rich whole-mouth taste that includes notes of dates, raisins, walnuts and even cloves. Its depth of flavour is just lovely, and if it has any fault at all, it is perhaps that it’s a bit too sweet. Though, it is a winter beer, so that’s hardly surprising. 8.5%. Buy it if you can find it.

The second beer Bob brought that weekend was Long Trail Imperial Porter from Vermont. This one was right up my street: burnt, with a dark head and smooth an creamy mouth feel. Tastes that emerged included espresso (or even Kaluha), birch and even warm raspberry jam. An extra dash of bitterness kicks in late, comfortingly. 8.3%. Excellent. I'd never heard of this one before, but I will definitely be looking for it on my next trip to the States.

Third on the list was Rogue Hazelnut Brown Nectar, and no mistaking the hazelnut in this one: it’s like the hazelnut syrup you get in a coffee bar. Hugely so. It’s overpowering and actually a bit off-putting at first, given there’s not much else to it: a thin mouthfeel, low fizz and not much sweetness. It sort of grows on you after a while, but it also leaves a coating on your teeth. 6.2%. Not something I’d go for again, to be honest.

Next up was Imperial Chokolat Stout from the Southern Tier Brewing Company. This one is insanely dark, letting no light escape whatsoever. It smells like a sweet chocolate mousse, and the taste isn’t too far off that as well. At least at first. Fluffy mousse evolves into chocolate syrup... And then a sobering bitterness hits you right at the end. 11%, so maybe not that sobering, but you know what I mean.

Our fifth tasting of the weekend was Alvinne Vuur & Vlam. It came across lemony, hoppy and well bitter, but it had a thin mouthfeel and developed in the wrong direction: to vinegary to sour to uriney. Unpleasant. Something tells me they were aiming for a V Cense and simply missed. At 12 euros a bottle, this was particularly disappointing.

Sixth on the board was Duvel Green. It pours with that wonderful puffy head that Duvel is known for. The taste is, however, sweet-and-sour and syrupy, and I just couldn’t bear it. I’m not a great fan of regular Duvel, but I’d prefer that to this any day.

We end with a Mikkeller. Now, anyone who has read this blog before and remembered anything at all knows I’m a fan of Mikkeller beers. Yes, it’s snobby. Yes, it’s geeky. And yes, it’s expensive. But I don’t care, because the beers are always outstanding.

Mikkeller Jackie Brown is no exception. The roasted barley aroma hugs you instantly. The taste is dark wood smoke and camp coffee wrapped in a thick creamy head with only a gentle fizz. Wow.

OK, my work is done here. I’ve caught up with some winter tasting notes. I think it’s time to reward myself with a beer in the final glows of the evening sun...