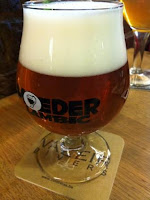 If I told you, dear reader, that I sampled a Spanish beer and German beer the other day, you would hardly be surprised, given my oft-mentioned proclivities. But if I told you that I preferred the former to the latter, you would no doubt send your eyebrows skyward.

Yet it’s true. A couple of quick tap tastings at Chez Moeder Lambic Fontainas the other day gave this surprising result.

Iberian in origin, Pura Pale is a lovely ale with a very strong hop element, bitterly refreshing. At 5%, this would be a great session beer. 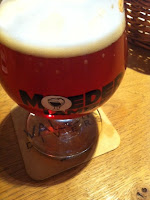 Affumicator is a German smoke beer, and really, I should learn my lesson with these. I appreciate the novelty, but it’s not really something I can drink much beyond a few sips, which is just as well with this one being 9%. It’s smokier than the Bamberg favourite Aecht Schlenkerla Rauchbier, but again, for me, that’s not selling it.

If you like smoke beers, you’ll love Affumicator, I’m sure. I’ll stick with Pura Pale.