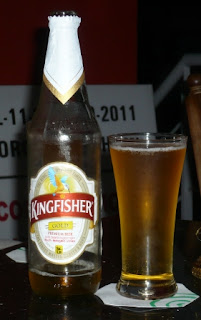 Travelling in India is overwhelming in nearly every possible way. The religions, the languages, the ethnic groups, the regional variety, the wealth differentials, the colours, the noises, the smells, the spices, the street life, the wildlife... everything competes for the visitor’s attention in one constant, all-engulfing, head-on rush of sensory overload.

Everything, that is, apart from the beer.

“How would you describe it?”, I ask Fiona after we crack open the first Kingfisher Gold of our holiday in south India.

“I’d describe it as the only beer available.”

She ain’t kidding either. Beer is not exactly easy to find in the states of Kerala and Tamil Nadu. It’s about the only thing not growing on trees in this area of rich soils and lush vegetation. When you do find a beer, it’s Kingfisher or, um, well, Kingfisher, though, the bird is far more common than the bottle. 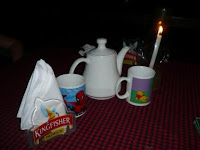 To add to the bizarre aspect of it all, in some restaurants beer will only be served in teapots and coffee mugs. This has something to do with the complexity of alcohol licensing laws in India and its individual states. If I had felt like doing intensive research instead of having a holiday, I might have figured it out, I guess. But in the end, we found it easy enough to acclimatise to “more tea, vicar” when we had to for a couple weeks. 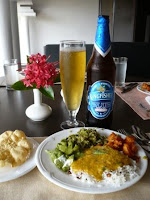 Getting back to the taste, there is not much to report, really. It’s one of those beers that’s passable in hot weather -- what I call a warm-climate lager -- but it has to be served icy cold or it tastes syrupy.

About the only question remaining is whether “Kingfisher Gold” is different enough from “Kingfisher Super Strong” or “Kingfisher Blue” to merit separate tasting notes. The latter two labels we came across once or twice, and both are 6%, as opposed to the 5% of “Gold”, and they are also a bit maltier. They are all equally unchallenging, however. 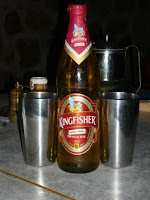 But, really, so what? All three are suitable to accompany spicy curries, of which we had more than a few. New Year’s Eve was particularly memorable, when we celebrated at a friend’s place in a remote part of Tamil Nadu. With a tandoori oven pumping out the tikka and naan bread, a Kingfisher or two go down very nicely, thank you.

As long as you can find it.