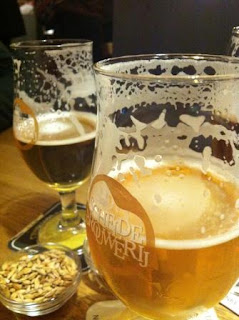 First, yesterday evening in numbers: I turned 43, the 40b40 blog marked its 3rd anniversary, and we chalked up our 300th tasting. All of this could only happen in one place, the best bar in Brussels, Chez Moeder Lambic Fontainas.

Beer number 300 was Hopruiter from the Schelde Brewery (Scheldebrouwerij). It’s a fitting way to complete my third century, given that, of the last 100 beers, some of the most impressive have come from Schelde, which I discovered at the Belgian Beer Weekend last September.

Hopruiter has a thick mouthfeel and a taste with something notably grape about it. In fact, it hits you like a (not particularly sweet) Muscat at first, though the initial fruitiness evolves into hoppy aftertaste. The menu says it’s 8% alcohol, but Bob says no way, seems lower.

It was at about this moment that we tried to find a video on YouTube (Chez Moeder Lambic Fontainas has WiFi), but we got rickrolled, which was hugely humiliating, especially on my birthday.

To recover from the embarrassment, we moved on to Mc Vertus. This, beer number 301, hails from the Brasserie Millevertus. It’s stout-ish, though a bit thinner. The dark, burnt malt shines through at first, but then, oddly, the flavour seems to drop off quite quickly. There’s little aftertaste, really. Overall, there’s not as much going on here as we initially expected. Fiona, who thought it had a funny smell, and Bob were both unimpressed. I thought it was good, but not outstanding.

We then sampled Hetzelsdorfer Weihnachts Festbier, a German brew produced by Brauerei Beck near Bamberg, and offered on tap at Moeder Lambic as a guest beer. It’s deeper and richer than what you might expect from looking at it. This Christmas beer is a bit creamy with a light spiciness and a solid hoppiness. 5.5% alcohol and a little flat. Bob notes, quite rightly, that it’s a bit like Palm, though it’s surely less sweet. In all, it’s undemanding but moreish. Yum. 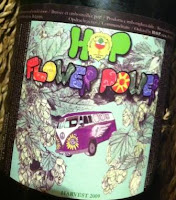 We wrapped up the evening with a bottle Hop Flower Power, from De Ranke. Beer number 303, if you’re still counting. “It’s only been brewed once”, we are assured, hence the “Harvest 2009” on the label, which is, um, not really the best I’ve ever seen. “With De Ranke, the uglier the label, the better the beer”, someone said, “and this is the best.”

This beer is dry hopped, and the taste is tumbling waterfalls of hop on hop, which is quite welcome in the current hop-hungry phase I seem to be going through. It’s got a comfortable mouthfeel, too. 6%. Quite lovely.

All in all, a great birthday evening. Ah, Chez Moeder Lambic Fontainas, I can truly say, I’m never gonna give you up.