Top ten bars, pubs and cafés for beer in Brussels 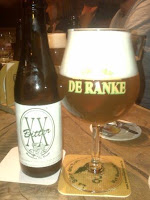 This post comes to you by popular demand. I am constantly asked what are the best places to enjoy a beer in this city, so it’s about time I set it all down properly.

Of course, everyone looks for something different in a bar or pub, so my list may not match everyone’s tastes. My three criteria for evaluating places are at least straightforward.

Firstly and most obviously, it’s got to have a solid beer selection. By this I mean quality not quantity. I’d rather a few good beers than a two-hundred-bottle list. And craft beers have to be well-represented, preferably on tap, though I’m no anti-bottle snob -- plenty of tasty beers live in bottles.

The second criterion is attitude. I don’t just mean that staff are friendly and so on. That’s important, of course, and not always guaranteed in Brussels, to be frank. But under “attitude”, I am also referring to an establishment’s whole approach to their trade. I can think of some Brussels beer bars catering to the pack-em-in, “let’s get bladdered” tourist market. Yawn. I can also name a few dozen pubby looking places that are so up themselves about being “restaurants”, that even when they are empty, they won’t accept customers who want to come in just for a drink or two.*

My third criterion is pretty simple: I want a non-smoking place. It’s not that I’ll never go into a smoky place, but if you’re asking me about “the best” bars and pubs, I’m not going to include a place where breathing is considered of little advantage. Don’t expect Delirium in the list, then... [UPDATE, June 2012: Since writing this 18 months ago, new anti-smoking legislation has eliminated the problem in most places, though smoking does still seem to be allowed in some bars -- or at least it happens with a nod and a wink. Not sure what the rules actually state, but it's much better overall.]

OK, then, enough introduction and explanation. On with the list of my top ten

1) Chez Moeder Lambic Fontainas (Place Fontainas 8): With 40 or 50 craft beers on tap and gorgeous artisanal cheeses to match, this slickly designed new palace of taste exploration is without equal in Brussels. The only thing that comes close is...

2) Chez Moeder Lambic St Gilles (Rue de Savoie 68): The original, cozy corner pub dedicated to Belgian beer. Amazing selection and, like its younger, sleeker sister, run by friendly folks who will talk you through the possibilities with care.

3) L’Ultime Atome (Saint Boniface 14): With a fairly extensive beer list and changing guest beers, L’Ultime Atome is easily one of my favourites. The food specials draw me in for lunch frequently (no, really, it’s the food), but they’re perfectly welcoming if you show up for just a drink.

4) Café Belga (Place Flagey): The great bar at the water-line of the ship that sails along Place Flagey, Café Belga is an institution. We love coming here on Sunday afternoons, but in winter, you’re lucky to find a seat. Despite the large size of this place, it gets packed quickly with the similarly minded.

5) Le Châtelain (Place Châtelain): Not a bad beer list and friendly service, this place is a steady, hassle-free local. Solid.

6) Café Sisisi (Place Janson): Of all the names on the list, this is, I’m willing to bet, the one most readers will have never heard of. But by the three criteria, Sisisi well deserves mention. It was closed for ages and recently reopened with a fair handful of bottled craft beers on offer. This is one to watch out for. I think it will do pretty well, as it’s literally just around the corner from one of Brussels big tourist attractions, the Horta Museum on Rue Américaine. Sisisi would be a good place to grab, say, a Zinnebir after a visit to this famous Art Nouveau monument. [UPDATE, June 2012: Hmmm... not so sure now. I went there the other day, and the beer selection was a bit pants.]

7) Au Soleil (Rue du Marché au Charbon 86): Sit back, have a Chimay White on tap and watch the world go by. Reviewing an old blog post, I realise it was a Chimay White at Au Soleil that started changing my thinking on strong blonde ales.

8) Supra Bailly (Rue du Bailli 77): This favourite comes with a huge proviso. Supra Bailly is only tolerable when the weather’s good and you and sit outside. If you ever go inside the impossibly hazy bar, you’ll be smoked like a kipper in about 20 seconds. But at a pavement-side table on a warm evening after work, it’s a fine place to enjoy a St Feuillien.

9) Brasserie de l’Union (Parvis de Saint-Gilles 55): A good beer list and an unpretentious place. I wrote about a Moinette Blonde I had there not too long ago.

10) Bar du Matin (Chaussée d'Alsemberg 172): If the sun’s out -- or if it’s not pouring down rain, at least -- sitting outside the Bar du Matin is a lovely way to spend an hour or two. And if you’re inside, the style of the place will make you forget about any bad weather.

* A good example of this counter-productive attitude to serving customers and making money generally is Les Brassins (Rue Keyenveld 36). It’s got a decent beer list, and it was until recently a favourite of mine. Unfortunately, they’ve now taken to not letting you even sit down unless you’re ordering a meal. We tried going in there the other day, and it was well after 10, so past the time they could expect dinner-eating clients, yet despite having empty tables, they refused to serve us just a beer. Now, I understand if it’s 8 or 9 o’clock -- so a normal time for an evening meal -- as a proprietor, you want your tables going to people worth 20 or 40 euros rather than people worth 5 or 10. But insisting on your “restaurant” status when no one’s going to eat is just self-defeating snobbery. Basically, it’s a pub that thinks far too much of itself. Wrong attitude.