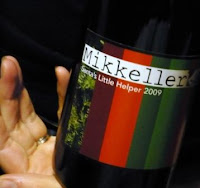 Tis the season and all that, so we’ve been doing our part to maintain the yuletide spirit by sampling a good number of Christmas beers in recent weeks. This time, it’s a Danish one rather than a Belgian.

Mikkeller is all the rage in the world of beer snobbery, and having tried two divine Mikkeller brews already -- Monk’s Elixer and Beer Geek Breakfast -- I can very easily understand why. This third Mikkeller beer, Santa’s Little Helper 2009, was every bit as wonderful as the first two.

It pours absurdly dark and rich, and the taste is burnt cedar and heavy spice: cinnamon, coriander and star anise. Chocolate notes swirl around with hints of orange peel. Just fantastic. Everything I love in a dark beer. More please...

We also made a podcast for this one as part of our “Beerly Coherent” series. Have a listen...