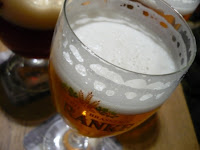 Another weekend of woeful weather brought another bout of tap beer tasting at Chez Moeder Lambic. Bob and I managed to try a number of new ones, including more Christmas beers, just in time to boost that holiday spirit.

First on the menu was Hop Harvest 2010 from De Ranke brewery, which also makes the plummy Guldenberg, the hop-happy XX Bitter, and the pitch black Noir de Dottignies. Hop Harvest 2010 is indeed what you'd expect: um, hoppy. It's bordering on piney even. But it was a little disappointing, to be honest, because undermining the bitter, dry crispiness was something a bit sweet and syrupy. I was thinking it would be a bit more refreshing than it turned out to be. 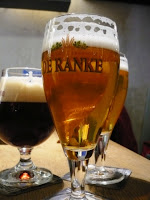 Père Noël, also from De Ranke, set off my hop-detectors much more than Hop Harvest. It's sharp and dry rather than sweet, which is not what I generally think are the qualities of a Belgian Christmas beer, but I've yet to ever really nail down any notion of a proper style in the whole Xmas beer malarkey. What do Affligem Christmas, Tongerlo Christmas Amber, and the other Christmas beers I've had lately have in common? Still, Père Noël does have something that evokes the season in it: some warming spices like nutmeg and, more obviously, a bit of candied orange peel. Very yummy. 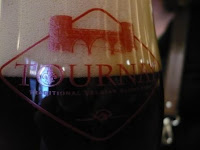 Tournay Noël arrives at our table dark, with a beautifully heavy foam. It's produced by Brasserie de Cazeau, makers of the very good Tourney Blonde and the outstanding Saison Cazeau. The taste of Tournay Noël is lightly smoky -- or maybe that should be, mildly burnt -- and somewhat sweet, with some rich biscuity flavours, cinnamon, nutmeg and licorice. The aftertaste almost edges toward that of a vinegar-like Belgian brown ale, but don't let that put you off. All its flavours blend very nicely, creating a taste that is complex and multi-layered, yet still unified -- both very rich and very mild at the same time. It's just incredibly smooth.

Bons Vœux comes from the Dupont brewery, and though Chez Moeder Lambic was offering both the 2010 and the 2009, we only got a chance to sample the latter. Again, the layers jumped out at us. It's got a strong herbal nose, which nears medicinal strength on the tongue, where the heavy floral notes are also amplified. Then, all of a sudden, your tongue and lips are sealed in wax, such is the aftertaste that hits you. It's a bit alarming at first, but then as you grow used to it, something else emerges: mango. Loads and loads of mango, like dried mango or, given the thick richness in mouthfeel of the liquid generally, even a mango lassi. Yum. 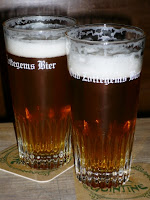 While those draft beers were enjoyed in Chez Moeder Lambic Fontainas, the final one -- Oud Zottegems Bier from the Crombé brewery -- we sampled in Chez Moeder Lambic St Gilles, after climbing the hill in the cold and wet. It's served in a tall glass, pouring a light amber colour. The taste is refreshing and slightly herbal, not a thousand miles from the Bons Vœux, in fact. But it's not that complex, doesn't demand as much, and ends up being somewhat easier to just enjoy rather than analyse. Simply moreish.