Snow is falling, there's pumpkin pie cooling in the kitchen, and Fiona's come home with a new beery find: a bottle of Tongerlo Christmas Amber 7. Ah, the joys of a late November evening in Brussels... It may not be Thanksgiving here, but it'll do just nicely.

Now, I don't really claim to understand Belgian Christmas beers. Every time I try one, I seem to get something different in my glass.

At one point, I thought they would all be dark and rich, like the outstanding Goulden Carolus Christmas, warming stuff for winter celebrations. But somewhere along the line, I realised they span across the spectrum of colours and styles, like the three Christmas beers I tried a week or so ago. 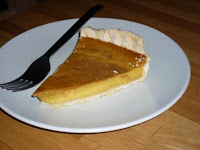 So, when Fiona handed me the bottle this evening, I had no idea what to expect. I've tried Tongerlo Christmas Blond and liked it, and Tongerlo Dubbel Bruin is also good stuff. Living up to expectations, this one also turned out positive.

Tongerlo Christmas Amber 7 pours a lovely copper colour. It's got a creamy smooth mouthfeel, with a mild sweetness common to Belgian ambers. With notes of cinnamon, nutmeg, and baked lemon zest, it goes very well with pumpkin pie. 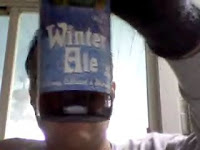 To bring in a proper American element of Thanksgiving to this Christmas moment, however, I had a quick video beer with my brother over on the left-hand side of the Atlantic. Unable to find a Tongerlo in Connecticut at very short notice, he instead enjoyed a Winter Ale from the Blue Point, Long Island Brewery, which he found, "nicely spiced, nicely hopped, with a bit of sweetness in the end".