As usual, Bob did not arrive in Brussels empty handed. He came bearing gifts, Three Kings style, continuing in the current Christmas spirit that has defined this weekend. 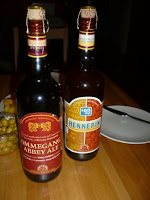 Next up was Ommegang Abbey Ale, another upstate New York beer, though the brewery is now owned by the Belgian firm Moortgat, of Duvel fame. Ommegang Abbey Ale, which aims to be a Belgian dubbel, pours a beautiful rich dark colour, and it has the taste to match. It’s highly aromatic, warm and wintery, with notes of liquorice, nutmeg and dried fruits -- apricots and prunes. Ommegang Abbey Ale has got a very strong fizz at first, becoming more pillowy as it settles. 8.5% alcohol. It’s a bit like a Rochefort 8, in fact. Very nice.

Hennepin Farmhouse Saison, another from Ommegang, did not instantly strike me as a saison, oddly. My first thought upon tasting it was that it seemed more like a tripel with notes of a honey-cured ham with cloves stuck into it. Bob and Fiona looked at me strangely when I said ham, though they agreed with the clove and honey notes. Ginger as well. There’s some bitterness coming through in the end, but overall, it’s a bit too sweet.

“Not how I remember it”, said Bob. It wasn’t bad, mind you, but I wouldn’t have called it a saison. We’ll have to give it another try.