When it comes to your standard mass-produced pilswater, I've always been of the opinion that one is pretty much the same as the next. They are lowest-common-denominator products, pumped out at a rate of seventy-four bezillion litres a minute and dominating the largest share of most beer markets everywhere.

But is that fair? Are they all the same?

The matter calls for a blind taste test. So, I asked my new, straight-haired wife, who happens to have the same name and voice as my former, curly-haired wife, whom I traded in earlier today. She poured them into glasses without me seeing, and off I went.

The beers in the test include some of Belgium's biggest sellers and a few others in that "premium pils" category: Jupiler, Maes, Primus, Vedett, Stella Artois, and Cara Pils. All of those are probably familiar enough brand names for readers apart from the last one.

Cara Pils is, to my knowledge, the cheapest beer on the Belgian market, and the preferred tipple of all men of leisure who attend invitation-only al fresco social functions in front of the late-night packaged beverage establishments. I was frightened even to walk into such a place to buy one. Well, maybe not frightened exactly, but I felt dirty. This beer's reputation was confirmed when I returned home and showed it to Fiona, who said, "don't you have to drink that outside?" 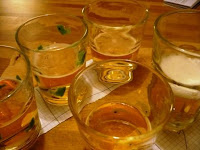 Anyway, just for comparison purposes, we added Rothaus Tannenzäpfle to the blind tasting selection. If I can't tell Tannenzäpfle from Cara Pils, I thought, I'll seriously consider hanging up my beer-tasting hat. Or start saving a bit of money.

So, off we went... Fiona set it up, and I sat there with seven small samples before me.

With a measure of relief, I spotted some differences right away. Three stood out as duds on first taste. One was flat, syrupy and pongy: that turned out to be Cara Pils.

But while that was not a surprise, two other flops may be: Jupiler came across as unpleasantly biscuity and grassy, and Stella Artois was disturbingly creamy and sweet. Those are two big names in the Belgian beer world -- perhaps the two biggest -- but in our blind-tasting, both were close to undrinkable. 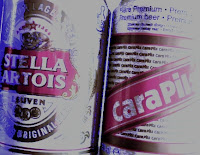 A fourth beer seemed decent at first, but on second sip, after it had been sitting for a few minutes, turned dull and heavy. That was revealed to be Maes.

That left three, and honestly, it was more difficult to tell differences between then than I would have expected with Tannenzäpfle in the mix. Of those, I actually guessed Vedett Extra Blond, remembering its crispiness. Primus, then, was easily the biggest surprise of the evening. Rather impressive.

What does it all prove? Well, first, the test shows that there are differences in mass-produced pils, even if sometimes those differences are quite small. It also tells me that some beers very much deserve their reputations.

But most of all, the test demonstrates that the new wife is turning out to be every bit as understanding and lovely as the old one.