We just spent an all-too-quick week in Bohemia, visiting old friends, hiking around the highlands and enjoying a few beers. The big news in the small town of Chotěboř, where we used to live about two decades ago, is the new brewery.

Chotěboř Originál is what I think used to be called a “desítka”, or “10”, back when we were there. It seems now breweries are using the terms “original” and “premium” for the weaker “10” and the stronger “12”, or “dvanáctka”. I’d always thought of them as lunch-time and dinner-time beers respectively. In any case, Chotěboř Originál is nicely bitter but a bit flat. Its alcohol level is 4.1%. 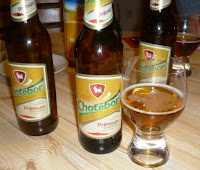 Chotěboř Prémium, which would be the “dvanáctka” in my old-fashioned reasoning, is by far the tastier beer. Again, bitterness is the first characteristic you notice. 5.1% alcohol, balanced well with something of a baked sugar cookie aroma. It’s got more fizz than Originál. 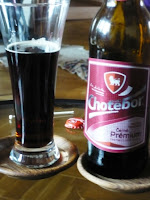 Chotěboř Černé Prémium is the town brewery’s dark offering. It’s a black lager not a million miles away from Köstritzer Schwarzbier, though it’s more bitter than that German treat. Worthwhile, though I still think Chotěboř Prémium is my favourite of the three.

From one small town on the Bohemian-Moravian Highlands, we move quickly to another: Hlinsko, whose brewery, offers Rychtář Prémium. Unfortunately, it’s a bit too syrupy in consistency and not crisp or bitter enough. 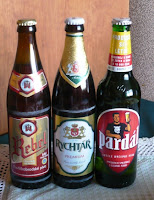 Moving south just a bit, we come to the district town of Havlíčkův Brod, where the Rebel Brewery makes Rebel Originál Premium. The name somewhat undermines my previous notions about new names, but at 4.8%, I guess it’s more in the 12 range than the 10. Anyway, it’s a good beer, with fine bubbles and decent bitterness. Solid stuff. 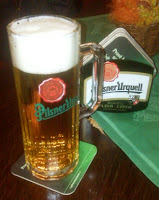 Next is a classic, probably the most famous Bohemian beer ever: Pilsner Urquell from Plzeňský Prazdroj in the city of Plzeň, or Pilsen, if you prefer. It’s strongly bitter, with a healthy, lasting head. My Czech friends say it’s good for the stomach, and they’ll recommend it whenever you’ve got a bit of a bug. Seems to work. I was lucky enough to enjoy one in the beer hall of Prague’s Obecní dům, which is one of my favourite buildings in the world.

We also tried Master Zlatý 15°, another one from Plzeňský Prazdroj. It’s clearly trying to occupy, or maybe create, a select spot on the Czech market, with something outside the normal range of pilsner-style beers. It only partially succeeds. Master Zlatý 15° is wickedly bitter and malty, with a 6.7% alcohol, so altogether edging towards a Belgian tripel in taste -- even nearly achieving that well-known grapefruit note. But not quite. It’s a good effort, but in the end, it tries too hard, promises too much, and ends up being disappointingly unspectacular.

Back at the straightforward end of the spectrum is Pardál, the kind of keep-it-simple offering I like. From the Budějovický Budvar brewery in South Bohemia, it’s a solid pilsner-style beer, well bitter, refreshing and uncomplicated.

With Czech beers, I think those that aim to get the basics right are the ones that succeed.