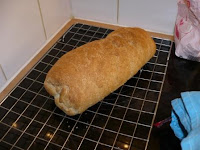 After a few hours of experimentation today, I think I'm getting closer to inventing a Belgian beer bread. But I'm not there just yet.

I first made a standard whole wheat loaf with dried yeast just to get into the swing of things (and remind myself how bread works). That was pretty tasty, so then I kept the same recipe but replaced the packet yeast with the dregs of some St Bernardus Prior 8, which of course is bottle-fermented so has loads of the necessary slimy mung at the bottom of it.

Not enough, however, as it turns out. The results of this one were not spectacular, to say the least. It just didn't rise very much at all. Given the quantity of dried yeast I put in the first loaf, I'm pretty sure the problem is that there simply is not enough yeast in the average bottle of live Belgian ale to get things going properly. 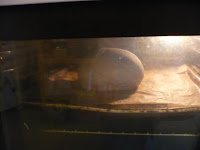 I then made a third experiment, using both beer yeast and dried yeast, and that one looks the best yet. (Cutting the whole wheat flour with a bit more white flour and kneading for a longer time also probably helped.) We'll taste it at dinner with friends in an hour or so. (UPDATE: it was great) 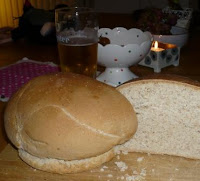 But I've also not given up on the idea of making bread using only the yeast from Belgian beer. Since I'm pretty sure the problem is the amount of yeast, I simply need to cultivate more of the stuff over a longer period of time. Say hello to my sourdough starter then: a tepid bottle of Bernardus added to some white flour and a bit of sugar, now sitting in a warmish cupboard.

I'll keep it there for a few days, and then, once I see some serious frothing action, I'll take some of the glop for a new loaf and see how that goes, with results (and hopefully a final recipe) to be posted here. That is, assuming Fiona doesn't bin the goo first. 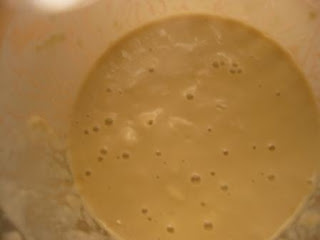 Email ThisBlogThis!Share to TwitterShare to FacebookShare to Pinterest
Labels: cooking with beer