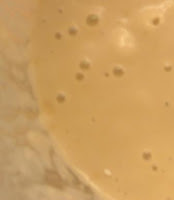 There are times in life when you just have to admit failure. You can give it your all, try your best, and push as hard as you can... but then, things just don’t work out.

So it was with my attempt at making Belgian beer bread via a sourdough method.

I still maintain the theory is correct. The bottle-fermented beer, added to flour and a bit of sugar, contained live yeast, and in fact, the micro-organisms in my experiment were producing some new alcohol in the goo every day, so I know it was still alive. But it really never took off to produce healthy bubbling dough starter as it should have.

I think the mixture may not have been warm enough to get the yeast really going properly. I tried heating it gently a few times, but it wasn’t the constant warmth that the little beasties probably need.

I’m not giving up, mind you. I will give it another shot at some point -- probably summer, when the kitchen is warmer. But for now, this experiment is officially over.

Email ThisBlogThis!Share to TwitterShare to FacebookShare to Pinterest
Labels: cooking with beer