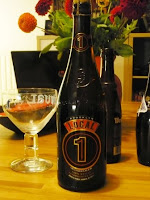 Brooklyn Bob, formerly of The Hague and my TV co-star, knocked on the door last night, and because he had a suitcase full of tasty beer from the Dutch Brouwerij 't IJ, we let him in. We tried two new beers, one from his adopted home and one from mine.

The label on "Local 1" from the Brooklyn Brewery claims it has "Belgian flair and Brooklyn fortitude", and it's not much of an exaggeration. Right away on opening the bottle, Bob sniffed bubble gum, a characteristic of many Belgian strong blonde ales. Tasting it, we all thought it had a lot in common with Chimay White.

It has a bit of pepper in the back of the throat, and notes of maybe cinnamon and nutmeg further forward. I also thought perhaps orange peel and something nutty, like cashews. Fiona sensed honey as well.

In all, Local 1 is a delicious Belgian-style ale, and Bob ought to be pretty happy to be moving fairly close to the brewery.

One thing strange about Local 1, however, is that it is mungless. It has no yeasty sediment in the bottle. This is a bit odd, because the label does say it is "100% bottle refermented". What's going on? Do they referment it in one bottle, filter it and transfer it to the bottle they sell it in? That's one for Bob to investigate in Brooklyn...

Next was IV Saision from the brewery in Jandrain-Jandrenouille, makers of the phenomenal V Cense, which is now on my list of top ten Belgian beers, and the excellent VI.

I'm still a bit confused by the Jandrain-Jandrenouille offerings. Why did they start with IV? Is it like the Star Wars films or something?

Whatever the case, let's move to the tasting. IV Saision has a notable grapefruit pith element, but it doesn't have the pink grapefruit juice loveliness of its sisters. "Can something smell sweet?" asks Bob. The mouthfeel is a bit thinnish, and it has notes of white pepper, and maybe red currants. It's very refreshing, though V Cense is still my favourite of the three.