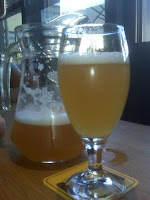 As much as I enjoyed our holiday in Jordan, Lebanon and Syria, I have to admit I am happy to be back home in Brussels. Middle East beers may be OK in a pinch, but Belgian beer is the taste I've been missing.

To celebrate our homecoming, we had a small tasting session this afternoon. We finally got to the new Moeder Lambic downtown. We've been to the one in St Gilles several times -- it's just around the corner from our place, really -- but we'd not tried their new location. Wow, what we were missing... The place is fantastic, with no less than 46 beers on tap, all from small Belgian breweries. I tried three from their "beers of the month" menu.

First of the three was VI from Brasserie de Jandrain-Jandrenouille, makers of the outstanding V Cense, which I discovered a few months ago. VI is an excellent wheat beer with a strong pink grapefruit juice tone, just like V Cense. The taste is brilliant. As with V Cense, I am amazed by this take on a traditional form. Highly recommended. 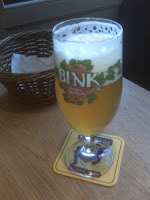 The second beer of the afternoon was Kerkomse Tripel. This one hails from the Kerkom brewery, makers of the dark and delightful Winterkoninkske, which I tried at the original Moeder Lambic ages ago. The tripel is wonderful: creamy, with notes of vanilla, butter, tarragon, and then, no joke, cantaloupe and ripe mango. Just gorgeous.

Third of three was Métisse, a saison-style beer. It's produced by the Lion à Plume brewery, though it actually seems to be brewed at the Sainte-Hélène brewery. Not sure what that's all about. In any case, it's from Virton, apparently the most southerly town in Belgium, which is in the Belgian province of Luxembourg. (That's right, not the country of Luxembourg but the neighbouring region in Belgium of the same name. Don't ask...) 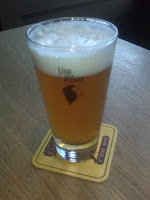 Back to the beer. The taste of Métisse is strong on citrus and yeast, with some notes of rosemary or lavender about it. It has a fresh woodiness, and there's something else besides: a refreshing taste on the central tongue that I can't quite identify. Maybe a kind of grassiness? But it's very nice. Clean aftertaste. Overall, it's just lovely.

Three out of three then. A perfect way to return to the home of great beer.

Oh, and the flower carpet was on Grand Place... 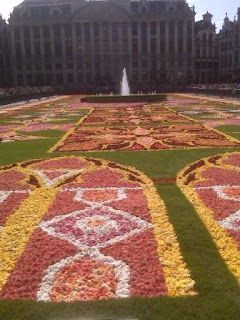