Seven beers of the Middle East 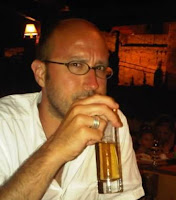 After a three-week family holiday in the Middle East, I can now report on a number of beers from that part of the world. Despite being most probably the original home of beer, the region is not exactly what you'd call a brewing powerhouse these days. Still, there are a few drinkable things in the general "hot-climate lager" category.

I have previously discussed a few Lebanese beers, but this time, I'm looking at Jordan and Syria, in addition to Lebanon.

First up was the Amman-brewed Amstel, which was, I have to say, not enormously impressive. Poured from a tin can, it was a bit too syrupy sweet. These things need to be crisp to be refreshing, particularly when it's hot out. 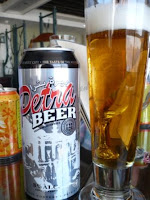 The second Jordanian brew was Petra Beer. It's not exactly your typical "hot-climate lager", because it boasts a whopping 8% alcohol. The taste is not bad, being more bitter than the local Amstel and with that 8% a pleasantly noticeable part of the balanced taste. It was a good way to end a long day of hiking in the sun around the fantastic ruins of Petra.

The expeditionary team then moved on to Syria, where a few days in old town Damascus brought us into contact with two local beers. 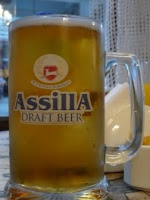 Initially, we had Assilla on tap, which was a thoroughly enjoyable lager. We sampled it in a pub on Straight Street that had a sign out front saying, "Beer, it's what's for dinner", and indeed, after a day of 44C (111.2F) heat, it pretty much was all we wanted to see on the menu. Crisp, clean, cold. Good. 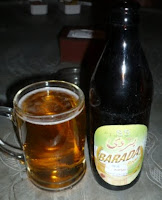 Unfortunately, the same could not be said of the second Damascene offering, Barada. It poured a bit flat from the bottle and had a watery taste. Not enough flavour of anything much, really. Weak.

On to Lebanon we went, then, with two old friends Almaza Pure Malt and Almaza Pilsner to comfort us. (Though I have to admit having an Almaza Pilsner in Damascus, too.) 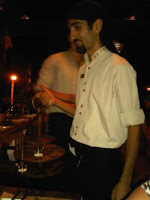 In Byblos, however, we tried an in-house beer at the Locanda a la Granda restaurant. Unfortunately, the waiter looked at me rather curiously when I asked to try the dark beer the New York Times mentioned in a travel article a while back, but he was able to bring me a few lagers in what looked suspiciously like Kölsch test-tube glasses in a Kölsch-style serving tray. The taste was not too bad, but it wasn't the dark I'd looked forward to, nor the Kölsch it appeared to be. Hot-climate lager pure and simple.

Finally, in a non-tasting note, I should point out an interesting bit of old mosaic we found in the museum at the mountain retreat of Beiteddine in Lebanon. It shows something strangely like a glass of Hoegaarden... 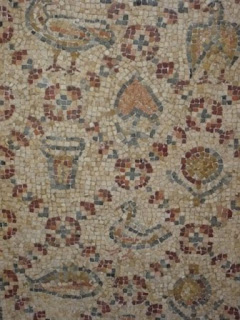