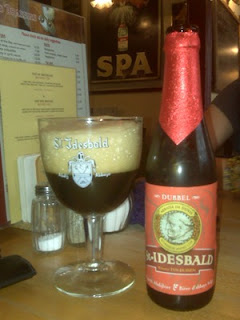 After wandering around in the rain and cold for an hour or two this afternoon, wondering when summer might restart, we dropped into Les Brassins to warm up. It’s one of my favourite pubs in Brussels these days. Good beer selection, nice atmosphere, non-smoking -- which is all I ever ask.

Fiona opted for her favourite tipple, Carolus Tripel, while I went for something new: St Idesbald Dubbel. It’s a dark abbey beer associated with the Abbey of Ten Duinen in the seaside hamlet of Sint-Idesbald.

The aroma and initial taste was green apple, interestingly. That’s not a common flavour. But it’s fleeting. A sharp liquorice quickly kicks in, which itself is then taken over by rich malt. That sweetness evolves into good bitter finish. Quite a lot of fine bubbles. 8%.