I’ve decided to smash through the double centennial with a five-beer set of tasting notes, a deep examination of offerings from Brouwerij 't IJ, a microbrewery in Amsterdam. I’d never heard of the place before, but apparently it’s the oldest microbrewery in that city, having been established in ye olden days, that is, 1985. Old or not, after these tastings, I am certainly going to seek out the brew-pub next time I’m in Amsterdam.

First up was Natte, described on the bottle as an “Amsterdamse bio-dubbel”. Deconstruct that phrase, and you understand, after the city designation, that this is an organic top-fermented ale brewed in the Belgian dubbel style. All the beers from Brouwerij 't IJ are organic, unfiltered and unpasteurised -- in that mud-in-the-bottle, ferment-until-drinking way we love.

Fiona was the first to praise Natte, saying it was somewhat like Gouden Carolus Classic from Het Anker in Mechelen. She said it tasted like brown bread toast. I found it deliciously woody. 6.5%. It’s very complex, and I need to try another to explore it more.

Second in our tasting of beers from Brouwerij 't IJ was IJwit, or “Scharral IJwit” perhaps. Yes, I think it does mean “egg white”, though the IJ is also a river in Amsterdam, so I’m guessing it’s a word game. All of the beers from this brewery play on the egg theme, and since this is a white beer... well, you get the idea.

This white is an outstanding version on the traditional Belgian style wheat beer. It’s got lovely perfume florals in it, with notes of kumquats or starfruit. It’s a rich fruit bowl. As different from the standard bearer of this class, Hoegaarden, as it’s possible to be. At 7%, it’s significantly stronger too. 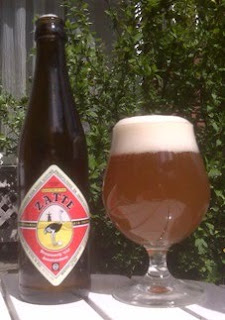 There’s another taste in both of these beers, which I couldn’t place until I had my third offering from Brouwerij 't IJ, Zatte...

Zatte is a tripel, a strong blond ale. It pours a rusty orange and has a stiff head. Like other Belgian-style tripels, it is dominated by citrus tastes. But while others tend toward grapefruit, Zatte leads with lemon. It’s cooked lemon or grilled lemon, deep and rich in caramelised fruit flavour, yet retaining its tang. It follows with some notes of rosemary, or maybe lavender, and it finishes with a bitter aftertaste.

And then there’s that mystery taste, common to all Brouwerij 't IJ beers tasted here, which only now do I recognise: Marseille soap (Savon de Marseille). It’s a traditional soap made from olive oil, which was “yellow soap” when I was growing up, despite it not being yellow. It was always the thing my mother would say when I came in from any particularly muddy playtime experience. “Yellow soap!”, meant go down to the laundry room and clean yourself with the heavy-duty stuff. 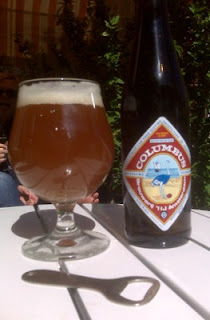 And “yellow soap!” it what all of these beers from Brouwerij 't IJ say to me. Now, don’t take that the wrong way: there is nothing soapy about these delicious brews. I am only talking about the aroma. Don’t ask me why they’ve got that perfume about them, but to me, they do.

Fourth beer in the set was Columbus, a “turbobiobier” according to the label. “Bio” I get. “Bier”, duh. As for “turbo”, I’ve no idea. Maybe the 9% explains that?

In any case, Columbus was another good one from Brouwerij 't IJ. Bob called it “assertive”. It’s very bitter, and maybe slightly more syrupy than Zatte. But it’s got great notes of pine needles and, of course, Marseille soap. 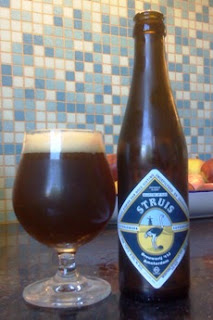 Finally, the fifth beer from the Amsterdam microbrewery is Struis, which means ostrich, if I’m not mistaken. The label describes it as a, “Buitengewoon superbiobier”, and calling it “extraordinary” seems fair. It’s got super amounts of fudge and grime (aka, yeast) in the bottle and glass, which is, remember, a good thing.

The taste is caramel, warm, sweet dark and rich. As it reaches room temperature up, you get strong notes of black cherry, peach and nutmeg. 9%. Excellent.

Altogether, these five beers from Brouwerij 't IJ are a great find. For those who thought Belgium had the Low Countries monopoly on great bottle-fermented ales, it’s time to think again.