We had a couple of friends over for dinner this evening and subjected them to a beery experiment -- really a series of experiments -- with food pairing. We served three courses, with each course accompanied by a different Belgian beer. Oh, and it was all vegetarian, of course.

First up was a starter of crostini with herb and lemon olive tapenade and roasted cherry tomatoes. The beer was the magical Deus, which surprised our guests somewhat. “This is beer? It tastes like the aniseed sweets you get after an Indian meal.”

The pairing worked. The beer’s floral notes picked up the herbals of the tapenade very nicely, with the lemon cutting in at the end to reinforce the freshness of Deus. With the roasted tomatoes, the combination also worked to some extent, the Deus florals highlighting the rich sweetness of the fruit. But the tapenade was more effective. 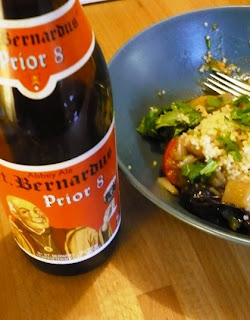 For the main, we made vegetable tagine with butternut squash, red peppers and prunes atop couscous with chick peas. Harissa paste on the side. The Belgian beer we chose was St Bernardus Prior 8, and again we found a good mix. I have to admit we’d experimented with this recipe before, pairing it with Chimay Blue, but St Bernardus Prior 8 works the same.

St Bernardus is a rich brew, and its caramel and date notes grabbed the cooked prunes in the tagine perfectly. Soft butternut squash merged its warm sweetness with that of the beer. Adding a bit of harissa was OK, but too much overwhelmed the beer, which seemed unable to deal with the fire. 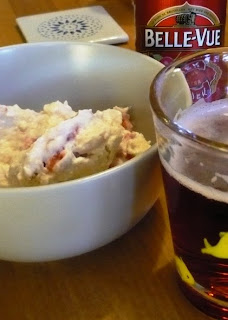 Finally, for dessert, we served Eton mess, with Belle-Vue Kriek. Now, I don’t usually go for the new-era soda-pop krieks like this one. I prefer the traditional style tart cherry beers, like Cantillon Kriek.

But this is where the food pairing comes in. Eton mess is so insanely sweet that the Belle-Vue Kriek actually worked. What is normally a beer I find simply too sweet to drink has been transformed into an able accompaniment to the dessert. With the meringue sticking to your teeth, a sugar wash is, somewhat madly, just what you need. And the cherry fruitiness of the beer blended well with the fresh strawberries.

Belle-Vue Kriek is well loved by one of our guests, though this is the first time I’ve written it up here.

“Interesting colour”, says our other guest. “Nice pink foam, but it tastes like a boiled sweet.”

Fiona agrees: “It’s like a cough sweet, like cherry Tunes. I’m not going to drink anymore, because I don’t want to ruin my Eton mess.”

Yet, the taste all depends on what you have with it. And sweet goes with sweet. There is a moment for every Belgian beer...