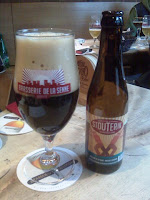 After I sampled the lovely Noir de Dottignies in Chez Moeder Lambic, the waitress recommended I try a bottle of Stouterik. It’s from Brasserie de la Senne here in Brussels, makers of Zinne Bir.

Stouterik is, as you’d guess, dark. The initial mouthfeel is slightly thinner than I expected, though after a Noir de Dottignies, almost anything would be. The taste of Stouterik is bitter and quite raw, with notes of sawdust, burnt caramel, stewed apple... no, stewed sour cherries. Then, in the aftertaste, I get Raspberry leaf tea.

Not bad at all.