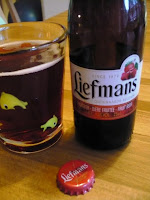 The question I have as I approach every fruity beer in Belgium is simple: is it going to be a traditional lambic like Cantillon Kriek or will it instead be a raging sweet storm like Belle-Vue Kriek or, worse, Mystic.

The label of Liefmans Fruit Beer says it has been, “matured on cherries, flavoured with 20% fruits (cherry, raspberry, bilberry, elderberry, strawberry)”. Sounds yummy...

But then one sip confirms: sugar water. I would say it’s slightly less of a kid beer than Belle-Vue Kriek, but still, it’s not something I can enjoy. If I want a Fanta, I’ll order a Fanta.

Liefmans Fruit Beer is even more disappointing than that, however. I’ve read about Liefmans Goudenband, and I’ve been looking forward to trying it. It’s supposedly a really different taste, and I’ve been searching everywhere for it. Now, sadly, I’m a bit worried that all my searching for Goudenband will turn out not to have been worth it. If it tastes anything like this, I’ll have wasted a lot of time hunting it down.