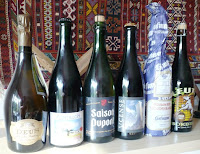 Last week, we held probably the biggest beer tasting event we've ever had, with about 20 people or so coming over to sample six different Belgian beers. It was a mix of old favourites and some new discoveries. (The beers that is.)

First off was Deus, which is one I often like to start with when we have people round. Most of our guests -- who cannot be shown in photographs for reasons of security and pending litigation -- had little if any experience with Belgian beer and its incredible variety, and the Deus was, as usual, a pleasant surprise, with its florals, lavender and rosemary. In fact, one person who had come into the room saying, "I don't like beer at all", asked for a refill of Deus. Twice.

Second, came Cantillon Kriek, again one we've tried before. Everyone loved the bright sparkling red colour -- another bit of the unexpected for the uninitiated -- and most enjoyed the taste. The extreme tartness of a proper kriek or gueuze is always a shock first time around, but everyone gave it a fair chance. Some fell in love.

The third tasting of the evening was Saison Dupont. Somewhat amazingly, despite this one being well known and even named "Best Beer in the World" by the magazine Men's Journal in July 2005, I'd never tried this one before. The aroma is big on florals, and the taste is very strong on hop, like an Orval, but there are really interesting notes going on here: ginger and something berry -- blueberry? It's foamy stuff, too. I was impressed with Saison Dupont, and so were most others around the room.

Number four in the evening's line-up was a beer I'd never even heard of before and which I'm not even sure how to pronounce: V Cense. Is it "veh sonz" or "cinq sense"? No idea. [UPDATE] But the taste of this strong blonde ale, from a newish brewery in Jandrenouille, a village just east of Brussels, is awesome. A real find. One guest called it, "the best beer in the world". The taste is pink grapefruit juice -- not the bitter grapefruit pith you get with other strong blonde ales, which is also yummy, but a wonderful blend of tart and sweet. Tasters found notes of cranberry and jasmine tea. Altogether awesome, and possibly pushing for a position in my list of top ten Belgian beers. If you see it, buy it. If you don't see it, ask for it.

From the best and most popular beer of the evening, we moved to... well... the fifth beer, Liefmans Goudenband. Again, a new one for me, this was a bit of a disappointment. Some in the room hated it -- I didn't think it was that bad, but I wasn't hugely impressed. It's a yeast float, quite flat, with a taste like a bit like a red beer but more drinkable. It has flavours of, according to the guests: acetone, marmite, soy sauce, malt vinegar, sautéed onions and molasses. I think there are some good possible food pairings with this beer: capers, for example. (Thanks, Kim!) Still, I wanted more from this brown ale. Perhaps my expectations were just too high, as I'd heard so much about it.

Finally, the sixth beer of the evening was Leute Bokbier, yet another new one for me and tasting number 196 here on this blog. This is a dark beer that someone recommended, comparing it to some of the Trappist darks like Westvleteren or Achel Bruin Extra. It is slightly lower in alcohol than those, however, at 7.5% compared to 10 to 12% with those. Perhaps it's a bit like St Bernardus Prior 8, though that's a stretch. Leute Bokbier is thinner, but it has some interesting notes, with peppermint and aniseed.

Eventually, then, the tasting did end for real. With V Cense the clear favourite of the evening but a lot of other lessons learned along the way.