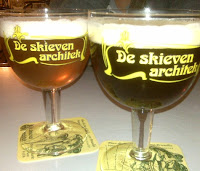 I was trying to take the day off, today, but I ended up on my laptop most of the morning, so after lunch, we all went for a walk. We ended up at the well-known pub, De Skieven Architek in the Marolles area of town.

The name apparently means, "the crooked architect", and refers to Joseph Poelaert, who designed the gargantuan Palace of Justice up the hill. Apparently Poelaert and the police were not too kind to the local inhabitants who were moved to make room for his project, the biggest building constructed anywhere in the 19th century. It seems things were so bad that the word "architect" was used as a serious insult in Brussels for years.

Anyway, the pub has many of its own beers, brewed from their own recipes at the Van Steenberge Brewery, which also makes Augustijn, Piraat and Gulden Draak. Without time to try all of De Skieven Architek's offerings, we opted for two from the tap: the blonde Capucin and the dark Poelaert.

Capucin was quite pleasant: creamy with strong honey notes. At 6%, it wasn't too distracting a blonde.

Poelaert, at 10.8%, was a different matter. Again, I sensed some honey going on in this one, but added to that was nutmeg and maybe even cinnamon. Unfortunately, I found it too syrupy and sweet. I wonder if the bottled version they sell, if left to age in the bottle a bit, might be better.

We'll have to try a bottle the next time we go to the crooked architect. That may be after beer tasting 200, which is now just eight glasses away...