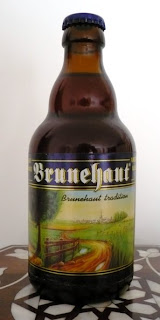 I can honestly say this is the first beer I’ve tasted because of Twitter.

I’ve been following the Twitter feed of the Brunehaut Brewery (@Brunehaut_Beer) for a while, so when I finally saw the beer in a shop here in Brussels, I was eager to try it. The power of advertising...

The brewery’s website notes that this beer is organic, though I don’t see the designation on my label. Perhaps I’ve got an older bottle?

Anyway, bio or not, Brunehaut Amber pours cola brown. It’s got a slightly thinner mouthfeel than you expect from the dark colour. Just looking at it, I was thinking it would be creamier. The flavour is burnt honey and malt, with biscuit. It’s got solid notes of liquorice, nutmeg, vanilla and, in line with the colour, cola nut. Overall, not bad. After the glass sits for a few minutes, I also get a welcome hint of cinnamon.

I’ve been following the UK elections results and the fallout now for almost 24 hours straight, so I’m exhausted and woozy. The alcohol level of Brunehaut Amber is a moderate and manageable 6.5%, which I think is more or less the swing to the Conservatives. This is tasting number 186, but I cannot form a majority with that.