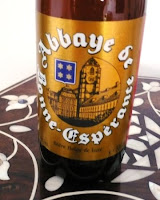 Of course, one starts out hopeful with every new tasting, but it was perhaps more so with this abbey beer.

The abbey itself is near Binche -- home of the solid Binchoise Blonde and Binchoise Brune -- but it has licensed the name to the Lefebvre Brewery in Quenast, further north and closer to Brussels. Lefebvre makes some quality products, including Floreffe Dubbel, which is on my list of top ten Belgian beers.

So, my hope was justified by more than the name.

Abbaye de Bonne-Espérance pours a rusty golden-brown, and the fizz is initially very high. The taste starts with a smooth mouthfeel, somewhat sweet, then moving to a significant hop-bitter aftertaste. It’s quite complex: caramel mixing with notes of vanilla, pear, faint licorice, and maybe clove. The alcohol pushes in for attention against all of that, though at only 7.8% -- hardly high by Belgian standards -- it seems to punch above its weight.

This is a solid strong blonde ale, but perhaps it’s just a little sweeter than I’d like. Next time I buy a bottle of this, I’ll try cellaring it for a year and see how it evolves with some extended secondary fermentation. I think if some of those sugars get eaten up, it would be a deeper, more rewarding brew.