Thursday evening was a unique moment in my exploration of this country’s brewing tradition. It wasn’t just the beer -- I’ve had the incredible Westvleteren 12 before, and it is, of course, already on my list of top ten Belgian beers -- but this was something different altogether.

After all, it’s one thing to schlep out to the middle of nowhere abbey and sample the beer in their café. But it’s something else entirely when someone offers a case and a half of his private stash of legendary Westvleteren 12, brings it to my home, and shares it not only with me but with my work colleagues as well... I felt for a moment that I had reached the Belgian beer blogger big-time.

Then, as ever, I am humbled by the beer. So much has been written about Westvleteren 12 that it’s hard to believe it can live up to the legend. Yet, somehow, it does. Dark, rich, puffy, dates, cream and figs. And port -- more port than I recall from my first tasting two years ago. I had always compared it in my mind to St Bernardus Abt 12 or St Bernardus Prior 8, but this came out a bit more like a less fizzy Chimay Grande Réserve. A bit surprising, but lovely just the same. 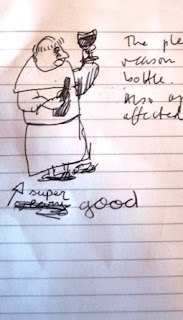 Comments on the beer around the room were positive. Most hadn’t tried Westvleteren 12 before, and they were impressed, if at times confused: “This is beer?” One guest was inspired to write the following next to his sketch of a monk: “The pleasant aftertaste is the chief reason that I am on my third bottle. Also appears to have significantly affected my ability to draw.”

We all owe everything to Herman, whose tremendous generosity made Thursday evening possible. And not only did he bring the beer, he also raided his cellars for some amazing wine, Sassicaia Tenuta San Guido-Bolgheri 1997. So, even the few wine-drinkers in attendance -- I had to let a few in just for balance -- could enjoy something stunning. Thanks again, Herman! 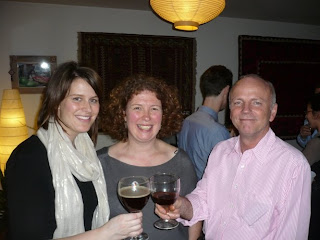 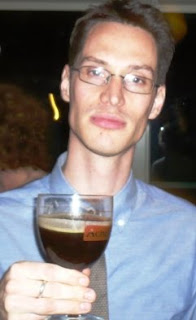 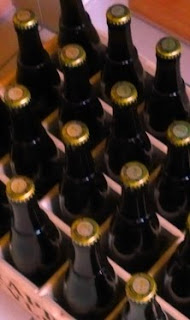