The evening of blonde ales continued with our fourth never-before-tested beer: Kempisch Vuur Tripel. This was the biggest surprise of the tasting.

Toby (photo below) summed it up: “pear with a caramel edge”. Though the summary doesn’t do this beer justice.

At first, I thought, “baked pear”. Fiona said, “pear drop”. But then the buttery taste kicked in. And vanilla.

Finally, it hit me: Petit Beurre biscuits. Now, quite a number of Belgian ales have a biscuity background flavour, but what I’m talking about here with Kempisch Vuur Tripel is not that. This is butter and biscuit together: in short, Petit Beurre.

Fiona noticed on the label that corn was one of the grains used to make this beer, and she believes that’s the source of this unusual taste. Could be.

The most extraordinary beer of the night. To me, the smell was of syrupy blackcurrant, not something others got. A nice colour, with ‘cumulus mung’ [as opposed to the ‘asteroid storm’ of Abbaye des Rocs Blonde, ed.] For me, it was too much as if syrup/concentrate had been injected in, but it was very pleasant for one or two rounds. You and Toby got a clear sense of pear; I got that more faintly than you did, but the caramel-ly edge of a ‘baked pear’ came out clearly for me. I struggled to pick up the buttery quality, but it was certainly there.

Kempisch Vuur Tripel is one of those really unique beers that you have to try. I wouldn’t want it every day, mind you, but I will certainly be having it again. 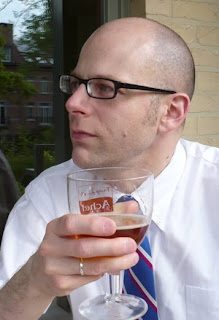