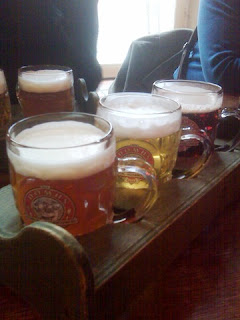 Despite a sudden cold or flu or whatever knocking me back a bit, we decided to take our visiting friends on a day trip to Leuven yesterday. We walked around the old university town for a while, but then, when I could take the tourist trail no longer, we came across the Domus Brasserie. It’s an amazing brew-pub -- tasty offerings and non-smoking -- so we were lured in, finding a table just under the pipeline running beer from the brewery to the bar.

Bob and I ordered the proefbedje, a selection of their three beers, in three mugs nestled in a wooden frame. “I don’t like the bed the mugs are sitting in”, said Fiona. Right. On to the beers... 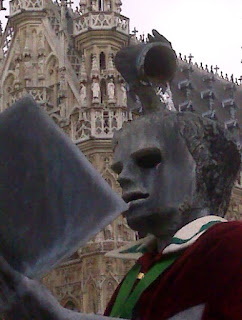 Domus Ochtendkriek: This is a reasonable kriek. It’s more in the modern style, so you can taste sweetness -- that is, not all the sugar is used up in fermentation as it would be in a traditionally made sour kriek, such as Cantillon Kriek. Still, it’s not as sweet as some of the ridiculous so-called krieks that are so popular these days. Domus Ochtendkriek tries to strike a balance, I think, between convention and current tastes, and it doesn’t do too bad a job of it. The cough syrupy aspect is good for sore throat, too. But Bob is unimpressed: “It’s a kid beer”, he says. 4 per cent alcohol.

Con Domus “het studentenbier”: This is an unfiltered pils. It’s hoppy, cloudy and very yummy. “There’s a strange herbiness to it, like the end of a Becherovka”, says Bob, referring to the Czech herbal liquor. I’m thinking woody lavender or rosemary. It reminds me a bit of the great German beer, Rothaus Tannenzäpfle, though this one doesn’t have the fine bubbles. Still, of the three today, this one was everybody’s favourite -- though for me, the next one was also excellent. 5 per cent. 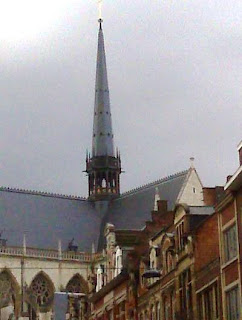 Nostra Domus: This amber offering has a wild mix of tastes. “Vanilla and caramel”, notes Fiona right away, to nods all around. Tinned peaches, too, I think, and some agree. “Walnuts”, says Nona. True. “It’s got a light texture”, says Bob, “but in a nice way.” We all feel there is something of a German Weissbier about this one. Slight burnt honey taste, too. 5.8 per cent.

So, to summarise, yesterday was the story of a long walk leading to exhaustion, then finding a warm house for a rest, and within, three brews: one too sweet and simple, one too complex, and one just right. In short, Goldie Bob and the Three Beers.
.