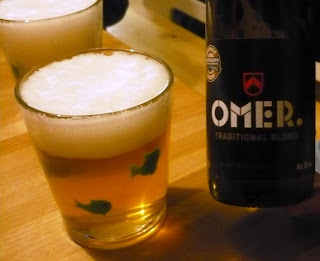 We picked up a few bottles in Leuven while we were there yesterday -- just a few things we hadn’t seen before. The first one up for tasting when we returned last night was Omer.

At first, I thought it was St Omer, a beer from French Flanders that I had back in October -- and still haven’t written up, sadly. I have to get to that one eventually. Still so many tasting notes behind...

Omer is from the Bockor Brewery in Bellegem, a village near the city of Kortrijk. So, not a million miles from St Omer then.

But it is pretty far in taste. Omer, a blond ale, is puffy, super bitter, yet buttery. It’s taste is long-lasting but perhaps too long. 8%. Overall, it’s not outstanding.

UPDATE, 3 December 2010: I think I gave this beer too negative a review first time around. It's not wildly outstanding, perhaps, but it is a solid enough contender as a strong blonde ale. It is now one of the beers I keep handy for everyday occasions, and I serve it to guests with no embarrassment whatsoever.