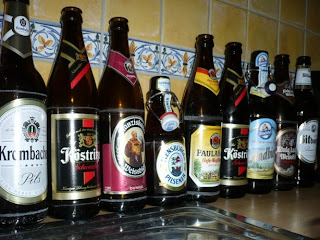 Well, it's taken five months to finally write about my fortnight in Germany last summer, and I'm really only getting to it now because we've been more or less trapped in the house by snow, rain and cold in recent weeks.

We spent a week in Thüringen and a week in Bavaria in August, which offered lots of beer-tasting opportunities. Memory's fading, of course, and notetaking limited -- it was a holiday, after all -- so this can't hope to be comprehensive, and not every beer below has a huge discription. But this list should give an overview of tastings, and it will definitely point out a few really fantastic finds. I attempt to group beers by style below, but I don't promise to get everything just right. 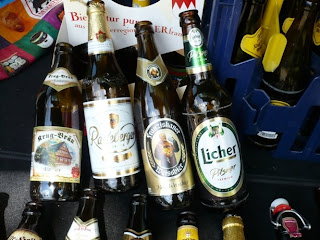 Enough excuses. On with the beers...

Franziskaner Weissbier: Better than Paulaner, I'd say, but I suspect there are lots of arguments about this.

Erstes Laufer Weissbier: Tasted after a long hike with a grumpy 9-year-old and other friends. Went down a treat. 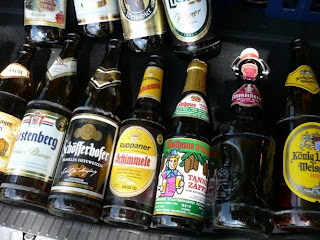 Then there were a number of pilsy and lagery offerings:

Bitburger Pils: A major brand. Not worth going out of your way for, which is why it has to be ubiquitous, I suppose.

Fürstenberg Pilsener: From Donaueschingen down south.

Ruppaners Schimmele: Pilsener from Constance on Bodensee in Baden-Württemberg. Quite nice. 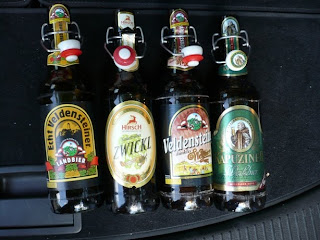 Brauerei Mager Pottenstein Pils: More on this brewery below...

Rothaus Tannenzäpfle: Almost unquestionably the best pils I've ever had. It's amazingly crisp, with fine bubbles and sharp hop bitterness. Crystal clear and tingly. It's brewed by the Badische Staatsbrauerei, which means it's owned by the federal state of Baden-Württemberg.

We tried a couple Landbiers, though I've really no idea what makes something a Landbier:

Mönchshof Landbier: Another ceramic-top bottle. I remember liking this one from Kulmbacher Brauerei in Kulmbach, Germany, which we eventually ended up visiting later in the holiday.

Weltenburger Kloster Barock Dunkel: The oldest cloister brewery in the world? It looks like a crazy place, being located down a gorge. www.weltenburger.de

Meister Vollbier: Funny thing is, Meisterbräu was the name of a really awful American beer, the cheapest available when I went to university in New York state in the late 80s. But this beer is definitely not that one. In the first place, it's excellent. In the second place, it doesn't come from the US but from a tiny little village in Franconia called Unterzaunsbachm near Pretzfeld and Egloffstein, where we spent a week. The holiday flat we rented had bottles of this stuff piled high, left for guests to drink and pay for on an honour system. Doesn't get any easier, really. An amber-coloured Dunkel, this beer is very slightly smoky, with bitter cutting into sweet with just the right combination. The brewery is small, but it was my favourite Franconian find. 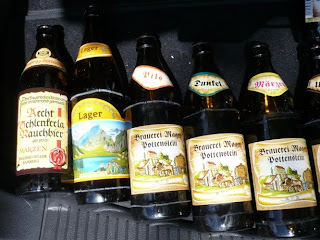 We took a trip to the small town of Pottenstein, a picturesque place located in and around cliff faces, and we tried four offerings from Brauerei Mager. Three are mentioned above, but their Märzen is quite good. I'd like to look into the Märzen style a bit more. 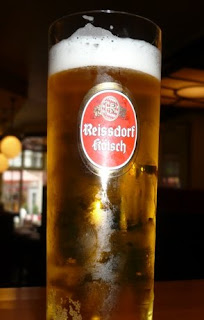 Reissdorf Kölsch: Tasted in Aachen at the start of the holiday, on our way eastward. A more-than-fair representative of the Kölsch genre, with which I toasted our youngest's sixth birthday.

Köstritzer Schwarzbier: Black beer is a speciality from Thüringen, and this formerly East German brew has seen a nation-wide revival in the post-unification age. Burnt caramel, yet still light and drinkable. Wow, wow, wow. This is one I really loved.

Aecht Schlenkerla Rauchbier: Very wild. A "smokebeer" from Bamberg. It's like no other beer I've ever tasted, having its malted grain smoked like bacon before brewing. It's the best known of this odd genre, but I've been told there are even better smokebeers from smaller breweries in and around Bamberg. Next time...
. 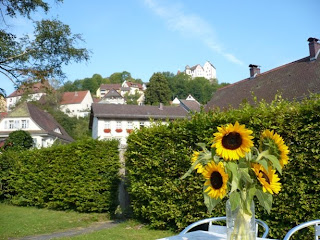 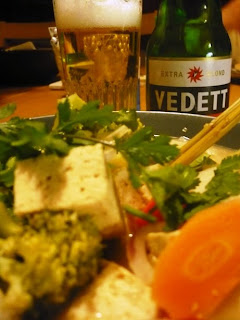 Spent a couple hours this afternoon cooking up a tasty Thai noodle soup, which we just enjoyed with a Vedett Extra Blond. A perfect combination.

Vedett Extra Blond is a crisp lager, not heavy in any way. Cuts through the spice with its ultra-clean finish. 5.2% alcohol makes it less frightening than many Belgian beers. It has some floral notes, which go perfectly with lemongrass. Almost certainly the best Belgian lager. Highly recommended.

Oh, it also has a great label with a penguin on it.
.
No comments: 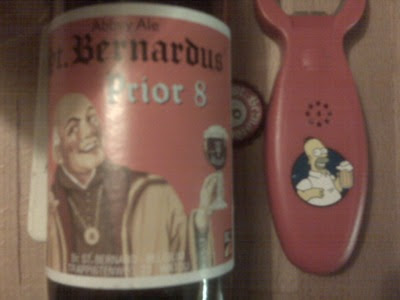 Bob and I came across a disturbing thing over the weekend. Just look at this photo and tell me it doesn't scream, "copyright infringement case". Of course, who whom, I don't know, but it's a wonder no one's noticed it before...

Just in case that photo seems a bit blurred -- much as it did when I took it -- I offer some close ups below. If you're a copyright lawyer interested in pursuing this case, please consider cutting me in on the eventual settlement. 5% or a case of beer would be just fine. But not Duff, please. St Bernardus Prior 8 only. 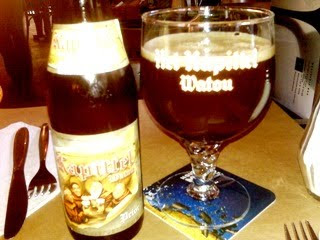 Had a lovely lunch today at l'Ultime Atome, a great restaurant just off Place Saint-Boniface here in Brussels. It offers an impressive Belgian beer selection, and I opted for a bottle of Kapittel Watou Prior. I wasn’t disappointed.

It is actually not a million miles away in taste from my beloved St Bernardus Prior 8. Dark and rich, with dried fruit notes. Perhaps it’s more bitter, and there’s a hint of marmite. But it’s a lovely beer, no doubt.

I suspect it's better than Kapittel Watou Dubbel, though to be fair, that one might have been served too cold.
.
No comments: 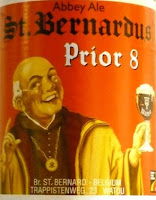 Yes, the birthday beer is an old classic: St Bernardus Prior 8. I know it’s long been part of my list of top ten Belgian beers, but I haven’t written about it for nearly two years, since nearly the start of the 40b40 itself. And that’s just wrong.

The strange thing about this blog, and the long, growing list of “Tasting notes” on the right-hand side of it, is that it naturally equalises all the beers. I mean, it could appear here that I have been drinking one of every beer -- or at least all beers in equal proportion. Not true.

Over the past year or so, particularly when it’s cold outside like it has been in recent weeks, St Bernardus Prior 8 (and St Bernardus Abt 12 to some extent) has been a house standard. The “man in a dress”, as we like to call the goofy-looking -- yet clearly zymurgically talented -- monk on the label, has become something of a family friend. I would, in fact, probably say that St Bernardus Prior 8 was my favourite beer of 2009.

And what a way to treat a friend! Not writing about him for so long... Particularly when he’s so tasty: dark, rich, creamy, warm yeasty gingerbread, nutmeg, dates, fine fiz to cut the richness... 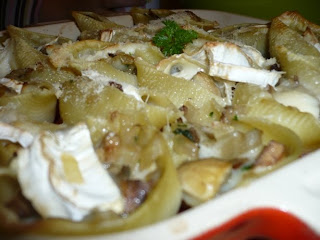 Luckily, my family did not forget me so coldly on the eve of my birthday. In addition to a manatee cookie cutter with cookie mix and hand-made artwork from the kids, Fiona treated me to a fantastic meal of goat cheese and mushroom stuffed pasta shells on a bed of baked cherry tomatoes, followed by my favourite dessert, black forest cake, also homemade. Both of which go very well with a St Bernardus Prior 8...
. 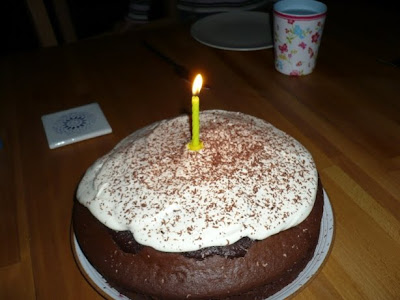 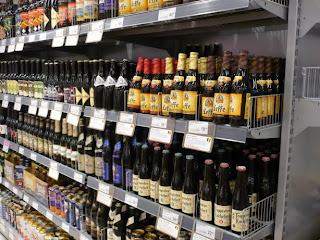 As the 40b40 approaches its second anniversary, I have been asked what beer I will drink this Thursday to celebrate the occasion.

Actually, I haven't given it much thought up to now, as I've been on a bit of a diet and cutting down somewhat. Plus, I have dozens of beers I've sampled but not written about yet, so I was thinking of easing the back-log first before writing about anything new. That's one way to cut down on calories, too.

This is another one we picked up in French Flanders, which we drank a month or two ago and I simply never got around to writing up. I remember it was great, though. Rich and malty, and almost approaching the super-darks of Belgium in creaminess, though with about half the alcohol content. If you find it, buy it.

But among the distractions of the last few weeks, I did a bit of genealogical research while in Florida at Xmas, and I found some beery links. My Dad has been keeping the family history files for several years now -- he can trace some of our roots back quite a few generations, and it turns out, our family includes at least two known brewery workers. Turns out I have an uncle who used to work in the old Kreuger brewery in Newark, New Jersey, before it closed -- apparently in 1961.

The other was my great great grandfather, who was also a brewery worker in New Jersey. The family legend is that he went to look for work in Chicago but never returned, and since that was just at the time of that city’s great fire in 1871, it is thought he probably died in that disaster.

None of this has anything to do with Noire de Slack, of course, but it does perhaps provide a genetic rationale for my interest in beer. Or, well, maybe not. 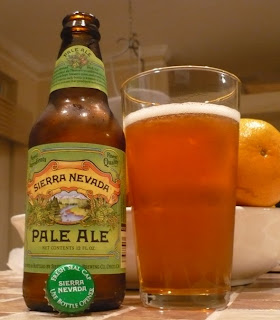 When I left the US almost twenty years ago, I didn't rate American beer too highly. Five or so years in Bohemia completed that separation. And now with my six years in Belgium, America seems very far away in brewing terms.

But amazing things have happened in the US over the past two decades. In short, Americans found good beer. There are about a thousand books and blogs dealing with this yeasty renaissance, of course, but as someone who only visits the States at most once a year, I am still astounded. The microbrews, the incredible variety... It's a whole new New World. Even in the tiniest out-of-the-way bars and everyday supermarkets, you can find beers like Sam Adams and Sierra Nevada Pale Ale.

Two weeks away from Belgian beer is difficult, but Sierra Nevada Pale Ale -- with a bit of Florida sun -- makes it easier. Looking into the bottle and seeing the thin layer of yeasty goodness at the bottom reminds me of home... 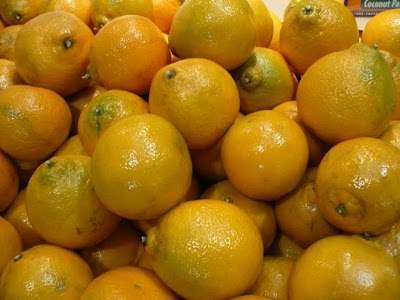