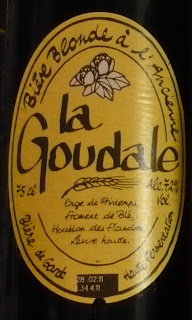 The other evening, we had some friends over, and together we sampled a few beers Fiona and I had picked up while in Lille the weekend before. Despite being a bunch of New Yorkers, these guys know a lot about European beers, so we wanted to get their opinions on what northern France has to offer.

After whetting our pallets with 3 Monts, which was very well received, we opened up a 750ml bottle of La Goudale, la bière blonde à l'ancienne. It’s a top-fermented strong blonde ale with 7.2% ABV from Les Brasseurs de Gayant in Douai, France.

The taste is immediately bitter, then slightly syrupy sweet. A bit longer in the mouth and I got a whiff of citrus, and when I mentioned this to the others, the groupthink landed on, “lemon -- the peel or zest, not the acidic part of the lemon, more the long-lasting lemony”. 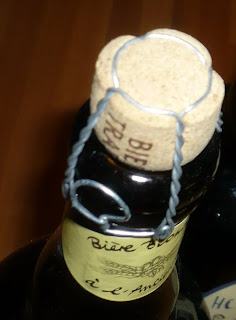 Still, for me the carbonation level seemed somehow a bit low, and the aroma had not entirely pleasing elements of empty pasta box or a sack of grain. Maybe even burlap or wood glue.

My friend scribbled out “spacious writing” on the common scrap-of-paper tasting notes, a curious thought the depth of which I am only now beginning to consider. He assured me at the time that it actually reads, “spiciness - nutmeg”, which could be, I suppose. They write differently in the big city, after all.