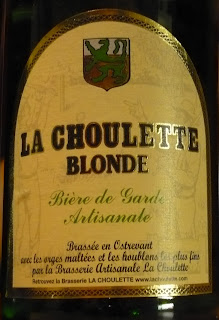 Continuing with Northern France season here at 40b40 -- after the outstanding 3 Monts and the passable La Goudale -- we move to our third beer in the series, La Choulette Blonde. It’s another strong blonde ale, a bière de garde brewed in the small town of Hordain. For those counting, it weighs in at 7.5% ABV.

The first aroma you get when you pop the cork is peanut butter or peanut brittle -- deep, earthy, oily, warm and sweet. “Fantastic”, said the expert, followed by, “ah, cashew”.

“Very clear in the bottle and sour to the taste”, said the blond. (Not the beer, obviously, though a few of these, and you might believe the bottle was talking to you.)

To me, it was like peanut oil in the mouth, and almost overpoweringly so. Almost. Not a crazy drink. Just nuts. 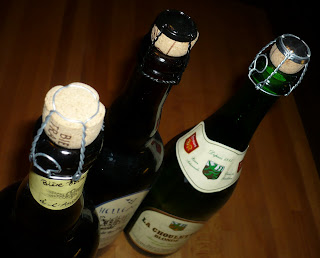