A Phoenician passed by our place at the weekend. Having just arrived from the homeland, he came bearing some tasty gifts, including a few kilos of fantastic fish kebbeh (not the deep-fried ball style, but the flat, baked loaf variety -- extremely rare, I’m told) and four Beirut beers. It seemed an ideal opportunity to invite some other friends over to sample them.

The first two we tried came from the 961 brewery, born during the July 2006 siege of Lebanon, 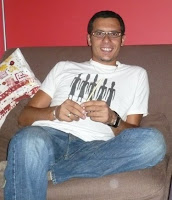 which says a lot about local resourcefulness and entrepreneurial drive, if not an admirable craziness. (961 is the telephone country code for Lebanon, by the way.)

The first was 961 Witbier, which is “inspired by Belgian Witbier”, but I’m afraid it didn’t quite meet that high standard. Comments on this 5.3% brew included, “Hoegaarden gone bad” (Bie), “very bland” (JC), “no taste” (Kostas) and “is this a beer?” (The Phoenician). 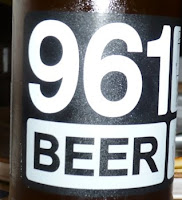 To me, it was over sour, with notes of waterlogged sticks and wet cardboard. To be fair to the beer and the brewery, I honestly think Bie called it right: this beer was probably damaged in transport somehow, either by radical temperature changes or something else.

I had the same thought with the evening’s second offering, 961 Traditional Lager. Like the first, it comes in a lovely bottle with a smart label, but something was off with the taste. The initial aroma was peanut oil -- flashback to the nutty French La Choulette Blonde. Though it had some worthwhile bitter notes and good colour, it tasted mouldy and was suspiciously flat. To me anyway...

Others had different ideas about this one, ranging from, “like Sam Adams, yummy” (Fiona), to, “ugh, sewage and cauliflower” (JC). Bie thought it “smells like pils”. The Beirut taster said it was, “sweeter”, but the one headed to Beirut to join him felt its aftertaste lasted too long. (Happy Anniversary, by the way, you two!)

Beer number three, Almaza Pure Malt, was much more impressive, easily my favourite of the evening. This dark 6% beer showed good fizz, with a simple maltiness and light caramel, gently burnt. Some cola nut notes. I think it strongly resembles Ciney brune. Katka called it, “dark and light at the same time”, which seemed a good description. Everyone agreed it was tasty, the best of the night without question. We're now working on getting some more over here, which may not be as hard as it sounds...

The fourth and final beer of the tasting evening was Almaza Pilsner. I think it is the first canned beer to appear in the 40b40,

but I have had it in a bottle many time at a Lebanese restaurant near the office, where I occasionally go for lunch. (OK, maybe a bit more than occasionally...) It’s what I’d call a standard hot-country pilsner. Nothing special. Maybe a bit more yeasty than you’d expect, but in any case, it’s one of those beers that tastes just fine drunk from the bottle on a hot sunny day, like they frequently get in Lebanon.
. 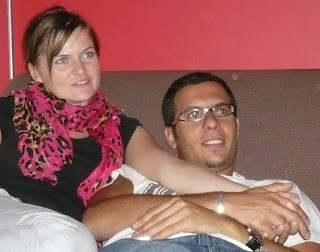 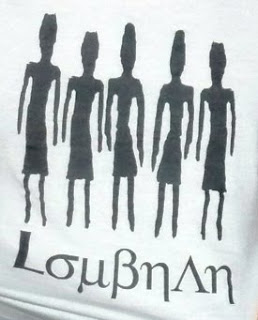