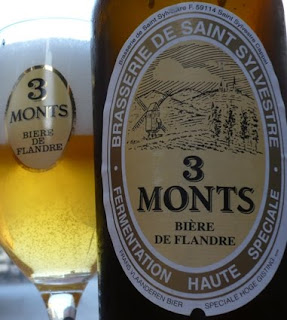 Just returned from a fantastic weekend in Lille, France, where -- among other things -- we explored the local bières de Garde. These are traditional beers of northern France, and you can easily see the overlap with Belgian beer. It’s part of a cultural continuum of brewing that has been disregarding formal frontiers since long before Schengen.

I bought a number of various brands, all in 750ml bottles as seems to be the custom, but the first one we tried was 3 Monts. It’s brewed just up the road at Saint Sylvestre Cappel, also in the Nord-Pas-de-Calais region, of which Lille is the capital. I was feeling pretty ill in the afternoon, but a good beer and some starch at the baked potato restaurant near our hotel seemed to do the trick. 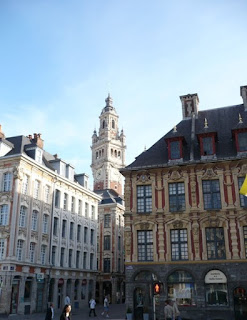 3 Monts is an outstanding beer. It is basically a strong ale, but it’s drier than average. There’s no syrupy taste like you get with some ales. Instead, it is sharp and clean, with a nice bitter hop finish. Tiny bubble carbonation with some lavender notes that remind me of Deus. But at two or three euros a bottle at the hypermarket, 3 Monts trumps it. 8.5% alcohol, by the way.

And, 3 Monts gets the thumbs up from Fiona as well. 750ml between two rounds off a day nicely.

I’d add 3 Monts to my top ten list, but my list is for Belgian beers. Dare I include it?