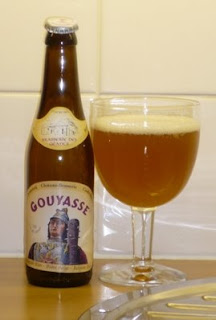 This is a beer from a town in Belgium called Ath, and it has a legend attached to it involving witches and giants and so on. More on that at the “Brewery of Legends” website.

I like the brewery’s webpage itself, too, which describes the beer-making process with some nice photos, demonstrating this stuff is lovingly made on a fairly small scale. I’d like to get out to Ath someday and have a look. It’s not too far from Brussels either.

But for those who can’t really be athed with all that, on to the tasting...

It’s an interesting mix of sweet and sour -- just when it seems to be going down a candy-floss route, it turns and hits you with a sharp, citrusy acid on the tongue. Thin and not overly demanding, it’s cool and refreshing on a warm evening like this one. 6%, for those who are counting. 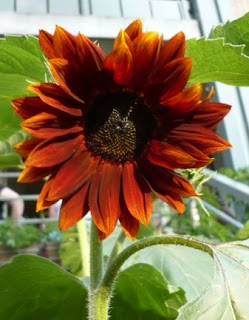 Overall, this beer is not exactly a giant, but it seems able to cast a small spell of its own. Just right for watching our fantastic red sunflowers grow...