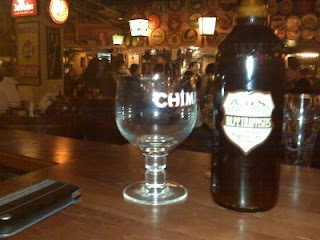 After more than a year of writing about Belgian beer, I finally managed to get my sorry self over to the Delirium Café yesterday. Pretty poor performance on the part of your Brussels-based correspondent here, given that this old town bar holds the world’s record for having the largest number of beers on sale, including about seven million Belgian ones. OK, a few hundred Belgian ones, but who’s really counting when there are so many on offer? Actually, the Guinness Book people did just that a few years back and found over 2000 types at Delirium.

I went there with Michael, a friend who was in town for a conference we were both attending. He’d just come in from Germany and brought me three bottles of German beer to test -- more on those later, however, because this evening, we were tasting Chimay Grande Réserve 2005.

As you’ll see from the photo, the bottle had quite a different label from the other Chimay GRs I’ve tried -- most notably, not blue. I think the bottle was produced for some kind of exhibition, because a small “LOT: EXPO2005” was painted on the bottle, and the label itself was painted, where usually they are simply paper labels stuck on. Anyway, it made a very convincing pop when the barman opened it for us. 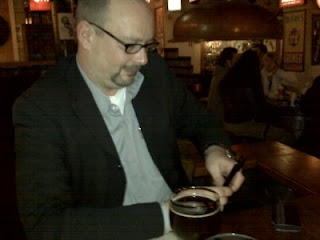 Initially, I wasn’t sure if I would manage to convince Michael, slightly wary of variations from the Reinheitsgebot, of the beauty and variety of Belgian beer. But the Chimay Grande Réserve 2005 did seem to move him in the right direction.

What finally persuaded Michael though, was the dinner that came after. The conference organisers invited us to La Rose Blanche on Grand Place, where everyone was treated to a three-course beer-based menu. That deserves its own blog entry however...