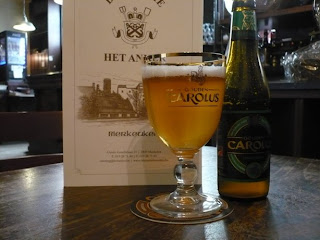 The strange name has a convoluted history. There is a statue on the main square of Mechelen that shows a small man apparently falling onto an uneven surface. This represents the city’s mascot, a wooden doll that would be thrown in the air by a blanket. Now, it seems someone from the rival city of Antwerp tried to make off with the dummy in the late 18th century, and the good people of Mechelen didn’t take kindly to that and roughed him up. This in turn angered the people of Antwerp, and in the nasty back and forth, which seems to have included some rioting, Mecheleners renamed their mascot after the nickname for people from Antwerp, “sinjoors”. 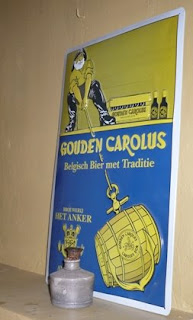 If you are still following all this and are now wondering why Antwerpers get this moniker, then you are more patient and curious than most, so I’ll tell you: Antwerp enjoyed favoured status under Spanish rule (late 16th to early 18th century), and it’s leaders were Spanish noblemen, hence the word “señor”. Calling people from Antwerp “sijnoor” doesn’t bother them in the slightest; in fact, it’s a mark of pride. But running around and tossing their effigy into the air may have been a bit more offensive.

Anyway, the statue on Mechelen’s grand market square is called, “Op Sinjoorke”, and the beer, Hopsinjoor, is a reference to all this and a bit of a play on words, because this is a very hoppy brew. Actually, it’s got four types of hops in it, and the resulting blend of bitters is worth repeating (unlike that story). If you like Orval -- and I do -- then you are going to love this -- ditto. With that refreshingly dry finish, I think it would make a great summer beer in particular.

Leaving you with photos of a very nifty building we came across after leaving Het Anker. Obviously a former pub of some sort, but great sign... 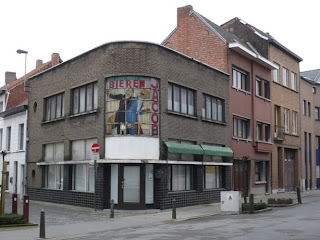 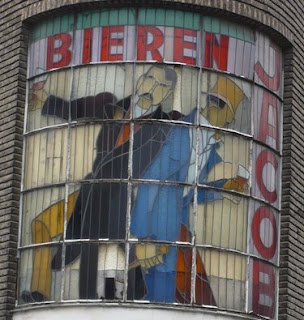 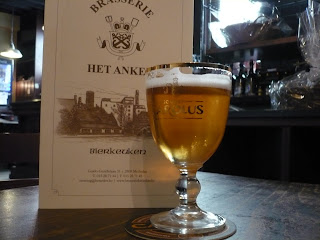 Het Anker pub is such a great place to sample beers: relaxed atmosphere, non-smoking, warm and friendly. It’s hard to believe our guidebook to Belgium (Rough Guide) doesn’t mention it on its Mechelen pages. It does have Gouden Carolus in it its top twenty Belgian beers, but no listing for the pub and brewery. Odd.

Anyway, on to the next beer...

Fiona’s taken a shine to tripels lately, with Chimay white label her default beer. But when she started sipping the Gouden Carolus Tripel from the tap at Het Anker, she’d found a new favourite tripel. You can really taste the Curaçao oranges and coriander in this dry, 9% beer. It is excellent, and we subsequently bought a couple bottles to take home. Hope we can find it nearby in Brussels when those run out.
No comments: 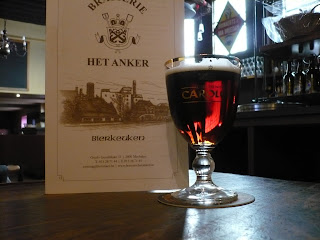 I reviewed this beer before during the official 40b40 marathon, but this time, I had it on tap because I was at the source. We took a family trip today to Mechelen, which is about 25 minutes north of Brussels by train, and in the afternoon, we went to the pub at Het Anker brewery, home of all the Gouden Carolus beers and a few others. 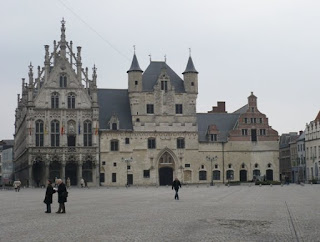 One-time capital of the Low Countries and Belgium’s ecclesia-stical capital today, Mechelen is a lovely city, and we had a great time walking around: market on the main square in the morning, then to the cathedral, lunch, other sights, and finally off to Het Anker. I’ve added a photo here of the disjointed town hall, which was built in the 14th century but then had one chunk of it ripped down and remade in a completely new style in the 16th -- the rest was supposed to follow, but then Margaret of Austria, governor of the Habsburg Netherlands, died in 1530, and building ceased mid-stream. The capital moved to Brussels, Mechelen was never the same, and the half-finished town hall is a constant reminder of its lost glory. 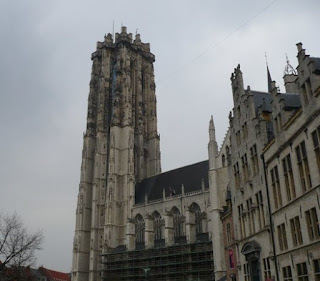 The cathedral of St Rombout, also pictured here, is one of the most interesting churches I’ve seen in Belgium. Loads of relics in reliquaries, an amazing wooden pulpit with carved animals, and a series of 25 paintings detailing the life -- and after-life -- of the legendary 8th-century saint himself, whose reliquary we got to see as the back of the altar was opened for some reason. I love relics and reliquaries, particularly bones in transparent cases. Each one is such a wonderful testament to some past scam: “Hey, pilgrim, looking for that special souvenir? How about the fourth metatarsal of Saint Fred?” We also heard the carillon chime, which here is quite a treat, as Mechelen seems to be the world’s top carillon location. They even have an entire music school dedicated to it.

Somehow, I got diverted from the subject, however, which was beer, specifically Gouden Carolus Classic on tap, consumed in the pub at Het Anker brewery. I liked this brew the first time I tried it, and this second tasting confirmed that opinion: dark, sweet, caramel, smoky, leaving syrupy coating on the tongue. I didn’t quite get the aniseed I remember from last time, but I wonder if that’s a flavour that develops over time in the bottle.
No comments: 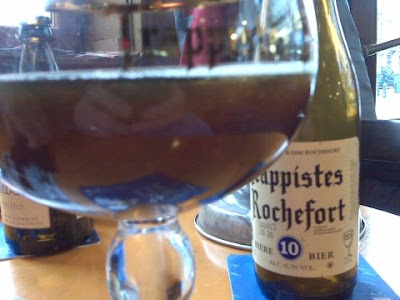 This is not a proper blog entry. I just took a lovely photo while Fiona and I were out at a local pub this afternoon, and I thought I'd share it. Rochefort 10 is reviewed elsewhere.

And, of course, posting this now is in no way an effort to cover up the last embarrassing entry...
No comments: 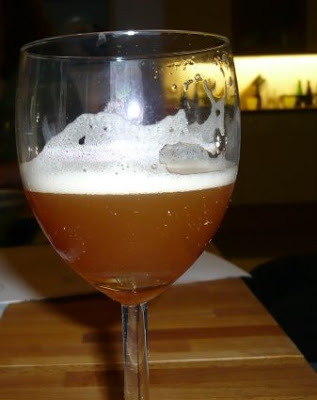 Thursday’s tasting of Orval was a bit of a surprise. The intention was to taste fresh Orval and one-year-old Orval and see if we could notice the differences. Well, it didn’t really work out as planned.

It started with Fiona setting up a blind taste test for five of us, using a couple of Orval bottles I bought a year ago and two I just picked up that night. She set out a pair of glasses in front of each of the five of us. So far so good.

Now, my expectation was that the young Orval would be more bitter and hoppy and the older one would be more mellow. As I’ve said before, Orval is normally hop, hop, hop. Plus, I have received a number of emails from Americans desperate to get their hands on the fresh Orval because they say the stuff they buy over there is all old and not sharp enough. 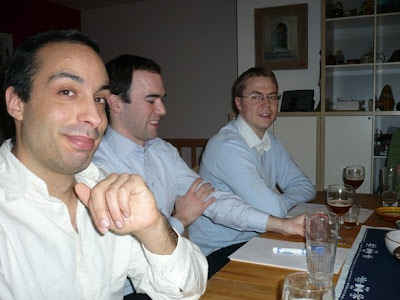 So, when I tasted the two, I quickly sensed the difference and thought I knew what was what. One was very aromatic, bitter and hoppy while the other hardly had any smell and had a taste that was more rounded. I figured this was easy: hoppy meant fresh so that must be the new one. Beermeister Seb agreed with me.

Turns out the bitter hoppy brew was the old Orval, and the odourless tame one was from the new bottle. No idea what that’s all about, but I am now thinking of hanging up my Belgian beer tasting hat in shame. Olof (pictured above on the right) was the only one of the five of us to call it right. Well done to him anyway...
No comments: