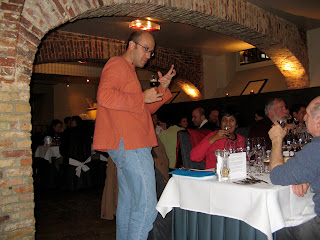 It has been about three months since my last entry. Shocking and unforgivable. What can I say? I've been busy.

Busy among other things planning and hosting a big Belgian beer tasting for over 40 people in the city of Bruges a couple weeks ago. Trying to get some more photos to share, but trust me, everyone seemed to enjoy themselves. I think I've found a new career.

As for the beers I chose to introduce to the international attendees, there were six, and if you've already seen my list of "top ten Belgian beers", these six probably won't surprise you.

But some of the reactions of the participants were interesting. It was a group including a number of committed beerophobes, and yet, I think I found something for nearly everyone. Here are my notes from the evening, with some comments from the tasters in italics...

For the most part, Belgium is unknown and unloved. When it comes to beer, however, this country has a most outstanding tradition. In both the wide range of brewing styles and in the sheer number of brands (estimated at over 700), Belgium is a brewing giant.

Even with twenty tasting sessions, you would barely scratch the surface of the rich variety of fermented loveliness Belgium has to offer. This short introduction will give you a chance to experience six of my personal favourites.

1 - Deus: Is it even a beer? Or is it the effervescent nectar of a thousand meadow flowers? Deus is in a class all its own. This beer actually goes through the same post-bottling processes as Champagne. Clear you palate, and prepare to reconsider everything you think you know about beer.

Deus turned out to be a great ice-breaker. All beer scepticism disappeared once the flutes were poured, and everyone had a sip. Nearly everyone loved it, and without exception, everyone found it a revelation.

2 - Cantillon gueuze: This beer is a taste of history. Beer has been brewed for at least four millennia, but before Louis Pasteur, no one understood the fermentation process -- that is, no one realised there were naturally occurring micro-organisms (yeast) that converted grain sugars into alcohol. Until the mid-1800s, when the Czechs developed Pilsner (lager), all beers were wildly fermented, which means the mixed up water and mashed grains simply sat in an open vat for a bit, while the yeast spores blowing through the brewery fell into the soup, triggering the fermentation process. That was risky, of course, because the brewer could never be sure the right yeasts would fall into the mix. Since Pasteur, most beer makers have sought to tightly control the process by adding the yeast to a covered vat. Cantillon, brewed in Brussels, has maintained the old tradition of wild fermentation, and the taste of its gueuze is what all beer would have tasted like before the 1850s or so: dry and tart.

The gueuze sparked a mixed reaction. Of the over 40 people in the room, four or five said this was their favourite beer of the evening. But it also provoked some strongly negative reactions in others, with several people not even being able to finish their sample glass. Love it or hate it, I guess.

3 - Hapkin: This is a strong blond ale, which is one of the more popular styles in Belgium. Usually they have manly names like Piraat, Brigand, or Lucifer. Hapkin is actually named in the same vein, as Boudewijn Hapkin was the 12th-century Count of Flanders known for being handy with an axe in battle. The best-known beer in this group is probably Duvel, but Hapkin is a bit smoother and mellower, with good floral essences and a hoppy dry finish.

This one had a good response, particularly from those who didn't like the previous beer.

4 - Orval: One of Belgium’s six Trappist beers. As a general rule, if a beer is made by guys wearing dresses, it is usually very good. This popular ale is a super-hop delight. Like most Belgian beers, the yeast in the bottle is live, which means that aging the beer produces significant changes in the taste. Cellaring beer is common in Belgium, in fact. You are tasting a relatively fresh Orval, so the crisp hop notes are dominant. If you let the bottle sit for 12 or 18 months, the taste of this beer would be smoother, richer and with a higher alcohol content.

Quite a few people found Orval too bitter. Surprising really, given how popular it is.

5 - Floreffe Dubbel: An abbey beer, which means an abbey has licensed its name to a brewery for the production of a traditional beer. So, not made by guys in dresses, but still worthwhile. A high-quality dark beer, with initial burnt or toasty notes evolving in the mouth into bittersweet dark chocolate.

The taste that came through most was licorice, which I hadn't really noted in earlier tastings of this beer. A few people really loved the licorice flavour, but I think I need to do another sampling. It didn't seem to be the beer I remembered.

6 - Achel Brune Extra: This is one of the six Trappist beers, like Orval, but the style is completely different: it’s a dark, creamy and rich brew. It is made by Trappist monks at an abbey in the north east of Flanders. With vanilla, malt loaf, gingerbread and Crunchy bar all wrapped up in a puffy cloud.

Nearly everyone loved this one. Quite right, too.