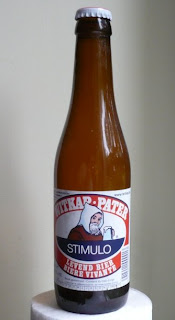 It’s been a long time since I reviewed a beer here -- more than a month. But a combination of overwork, holidays and dieting have kept me away from Belgian beer for a bit. Now, after a ridiculously full week back at work, I’m ready to break the dry spell with a bottle of Witkap-Pater Stimulo.

It comes from the Slaghmuylder Brewery, which also produces a delightful Paasbier

This live brew seems a bit thinner than a standard Belgian ale, with more bubbles and less of that over-the-top yeastiness that, to be honest, can get a bit oppressive sometimes. It has a hint of pine, which somehow transforms into bubblegum in the aftertaste. It’s good. Better than good, in fact. 6%, which is exactly what I need right now.

I know, I know, it’s been so long since I’ve had a Belgian beer that I’d go for anything, but seriously -- no, honestly, you really must believe me -- this is tasty stuff. Stimulo is stimulating.

And it’s disappearing too fast. After the liquid drains from this glass, I’m back on the diet. Groan.

I notice Chipper Dave of the “Fermentedly Challenged” blog has started a “Great American Beer Diet Challenge”, in which he and other beer bloggers race to lose the greatest percentage of body weight in eight weeks while still drinking one beer per day. I thought about joining them, but when it comes down to it, I just find it too difficult to go through the whole “one beer a day” thing again, as I did with the original 40b40 challenge.

Plus, I just cannot diet and drink Belgian beer at the same time. It’s not only the relatively high alcohol content of beers here (and alcohol means calories), but beer quite simply reduces my resistance to snackophilia. I’ll try one a week for a while instead...