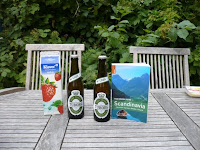 Returned last weekend from a holiday delighting in the wonders of Jutland and Schleswig- Holstein. From the beer perspective, it was a bit mixed.

Beer in Denmark is insanely expensive -- the equivalent about five euro for 0.4 litres of basic pilsner in a pub. We ran to the shop in the town of Ribe for a couple of bottles of Tuborg. Nothing to write a long blog entry about. 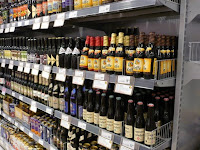 Pickings were better in the supermarket in the city of Vejle, where as you can see here, they had a healthy selection of Belgian beers.

We opted for a 750ml bottle of St Feuillien Blond and a picnic lunch of bread and cheese. It was the day after our big day at Legoland, so the parents were due a serious break.

It's a fairly typical Belgian strong blond ale: bold and yeasty, good body, the right amount of fizz and froth, and quite hoppily bitter. I'm not sure it distinguishes itself from the pack very much, but it's no slouch, especially after a full day of fun park terror.

Later, we found ourselves in Germany, in and around Husum, the town Theodor Storm put on the literary map. I read his book The Dykemaster (Der Schimmelreiter) while there, and it proved the perfect way to spend the evenings after long days of driving around the dykes and walking over the beaches and mudflats. It's a terrific tale, both apt for its place (North Frisia) and time (written in 1888), but also with observations about human behaviour that go far beyond.

The book went well with Flensburger Pilsener on tap, as here. I do think it tastes better in its ceramic top bottle -- we had that on a boat going out seal-watching on the sand banks, where the massive tidal flats meet the North Sea.

My former colleague Fred now works in Kinshasa, Democratic Republic of the Congo, and he has sent me a few photos of the beers he's drinking there. Ngok is from the Republic of Congo; Mutzig and Primus are from DRC. 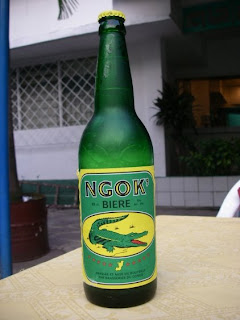 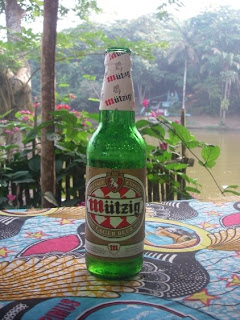 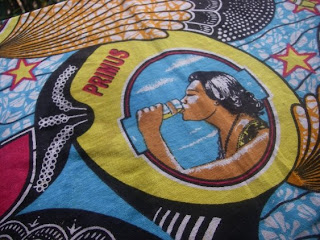 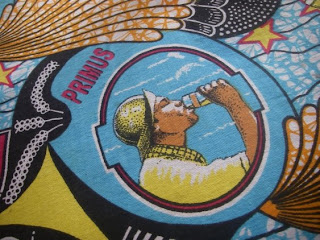 Fred's got more great photos of Congo on his Flikr page, and not just of beer. Highly recommended.