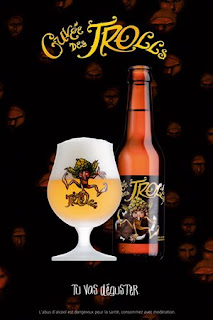 I have already poured scorn on the idea of using fairy-tale creatures on beer labels, but since we’d just emerged from the cinema where we watched a very good new fantasy film, Chasseur de Dragons, I decided to give La Cuvée des Trolls a try.

We sat down in the nearly empty Armour Fou on Ixelles high street, and after waiting about 30 minutes to be served, I had in front of me a frosted glass with a little gremlin painted on it. I felt very adult.

This is not an unusual or exceptional blond beer. It’s smooth and yeasty, slightly lemony. Drinkable enough, but nothing worth killing a lot of time writing about.

Would rather kill that fucking little troll.