Starting from the very top, the blue foil wrapper over the bottle cap of Villers Brune is not attractive. But then, the maker of this beer is the Huyghe Brewery in Melle, near Ghent, and producer of Delirium Tremens, which also has blue foil on it.

What matters however, for this, our ninth Ardennes winter retreat beer, is what’s inside the bottle. And the answer to that is more complex than a little foil covering can conceal.

“It smells thick”, said Bob, and as weird as that sounds, he was right about the aroma of this intensely dark, heavy-headed beer. 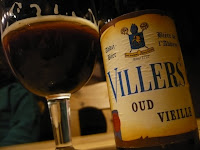 This abbey beer has got a strange taste. It coats the teeth and tongue in a sticky way unlike any other beer I’ve tried so far. It’s sweet to begin with, switching to a very bitter aftertaste.

I wasn’t convinced at first. The mix of super sweet and strongly bitter was too overwhelming, but the taste grew on me over the course of one glass. Yes, I’d get this again, too -- if only just to give myself another crack at unraveling its complexity.