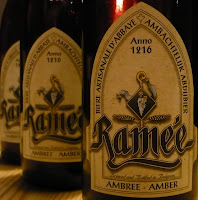 This one may have been the only significant beer tasting disappointment of our Ardennes winter retreat.

It’s strange, really, as I’ve seen many people ordering this abbey beer in pubs, and while that certainly doesn’t guarantee a beer is a winner, it usually means it’s at least drinkable. Ramée Ambrée (Tripel) is not.

The predominant tastes are all medicinal: Listerine, bitters, Becherovka (the Bohemian herbal liquor) -- or “post-Becherovka barf bitterness”, as Bob concluded. There’s something like juniper in it.

Michael Jackson, the man who never met a Belgian beer he didn’t like, praised Ramée Ambrée (Tripel), saying it had, “a very good malt aroma, a toffee-ish, fruity palate, and a dry finish”.

We didn’t find those tastes at all. For me, the lasting impression was a blue Strepsil cough drop, the kind with lidocaine. There haven’t been too many beers in this 40b40 experience that I actually had to pour away, but this was one. Could we have perhaps bought a bad batch? Why would anyone buy this stuff twice? Unless you have a sore throat, maybe...