The Only Brewery of Malmedy 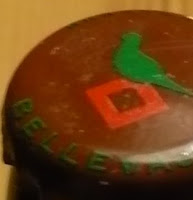 Controversy has hit our happy beer tasting series from the Ardennes winter retreat -- or at least it seems I screwed up the other day, when I said the small town of Malmedy had two breweries. In fact, it only has one, as has now been pointed out to me in a letter from that unique establishment, Brasserie de Bellevaux.

I reviewed their Black beer and found it “yummy”, which is a statement that needs no correction. I also have notes here to write about their Brune, so stay tuned for that blog entry.

Where I got confused was when I reviewed Bière de Malmedy Brune, which I’d thought was also made in the Malmedy commune, but is actually brewed by Brasserie Lefebvre in Quenast, a town a bit south of Brussels, makers of Floreffe among others.

This does explain one thing, however. When I wrote about the faux Malmedy beer, I included a photo of a truck clearly belonging to the makers of that beer, and I said. “Not sure where the lorry-load of Malmedy Brewery’s beer ends up. I’ve never seen it anywhere else but in this corner of the Ardennes.”