It’s been a while since this blog has had a video-linked beer tasting from Connecticut. Not since the sillier days of January, with Gulden Draak and Piraat have I sat down for a beer with my brother.

We chose Lindemans Kriek Lambic mostly because he can find it easily enough near his hometown, though I have to admit that after my experiences at the Cantillon Brewery here in Brussels (not once but twice), I was more than a little worried this would be one of those lambics I was warned about: the super-sweet new-style that has little if anything to do with the traditional sour variety. 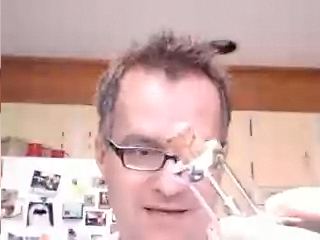 But before we got to the tasting, which I enjoyed on the terrace sun-trap, we had a matter of opening the bottles, which was confused by the methodology. While I only had to pop a crown cap, Brian had both cap and cork. We hadn’t been surprised that the same product in the US and Belgium had a different label, but this cork-non-cork business flummoxed us greatly. Why the different seals? 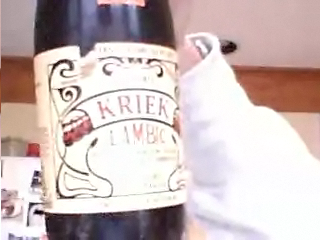 Indeed, it’s more like a soda... and heavy on the syrup.

Fiona comes over and tells me, “you stink of cherry, and it’s really nasty”. 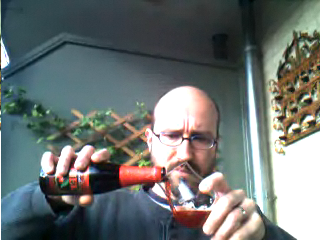 Looking for a nice word to say, Brian points out that it’s got, “a nice bit of sediment on the bottom”.

Of course, for traditional brewers like Cantillon -- and those like myself who agree with their ethos -- this sticky sweet stuff will just never cut it. I know public tastes have been growing sweeter in recent decades, and producers will naturally chase the fickle market, but Lindemans Kriek Lambic is to proper beer what Twinkies are to our local patisserie. 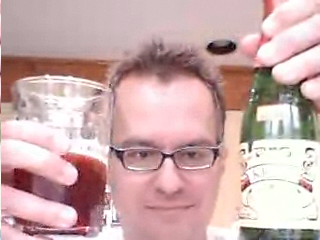 About the only thing that saves this drink from getting poured down the sink is a desperately needed bitterness just at the very end of the aftertaste. Sadly, it’s only the faintest hint, and Lindemans is probably working on a way to eliminate that, too.