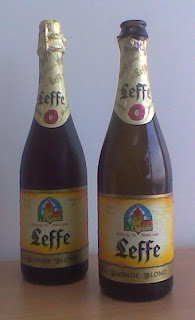 It’s hard to believe that after 84 Belgian beer tastings, I haven’t written up Leffe Blond. This is such a standard offering in Belgium, and elsewhere, that it’s almost impossible to avoid drinking it. Admittedly, I have had it before many times, but I haven’t officially put down my tasting notes. Until now.

Perhaps the other reason I haven’t yet blogged about Leffe Blond is that I’m not much of a fan of this abbey beer. It’s not a poisonous beverage or anything. It’s just too sweet for me. And too syrupy sweet at that. Thick and sugary is fine for honey, but not for beer.

“This has a taste that makes you thirsty”, says my colleague Milo. Maybe there is something in that, actually. Leffe Blond is so sweet that it never really quenches your thirst like something more sour or with a stronger hoppy-bitter aftertaste.

Leffe has another product called Leffe 9, which is getting promoted all over these days and which I find far superior to the Blond. I reviewed Leffe 9 back in January. In fact, it was the second beer to appear in this blog, so I don't want to hear any accusations I am ignoring Leffe.