With the Ardennes winter retreat beers all tasted and finally accounted for, it is time to open new bottles, and the 84th beer review of this Belgian beer blog: La Trappe Quadrupel.

The Koningshoeven Brewery, the only Trappist brewery in the Netherlands, has created a bit of a gimmick with this beer. With the concepts of “dubbel” and “tripel” fairly open, and confusing, as categories, they’ve gone ahead and produced a “quadrupel”, a label which doesn’t really mean anything at all as far as I can tell. To me this is simply Spinal Tap marketing hoping to attract those looking for that little bit extra.

The reality is that this is a slightly above average strong blond ale. Don’t expect greatness just because “this one goes to eleven”.

And it doesn’t quite go to eleven, if truth be told. It’s got 10% abv. This is all too obvious from the first sip, which is fumy, almost to the point of overkill. Not quite a fire-breathing Bush Amber but not far off either. Behind the alcohol, La Trappe Quadrupel is fairly sweet, though this is balanced by a slight citrus taste, like grapefruit pith, and roasted cashews, and these two flavours save this beer. 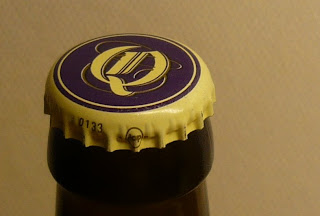 Overall then, the Quadrupel is a good beer, but mere “good” fails to meet the -- perhaps, “my” -- expecta-tions of a Trappist brew. To credit them, Koningshoeven also makes La Trappe Dubbel which I reviewed earlier and rated higher than this one.

Maybe the best feature of La Trappe Quadrupel, however, is its colour. Though a blond in style, it’s dark orange, like rust, with a thick, creamy head. “Wow, that’s a gorgeous colour”, says Fiona peering through the full glass towards the last rays of the setting sun.